TN Together: Ending the Opioid Crisis

Each day in Tennessee, at least three people die from an opioid-related overdose, which is more than the number of daily traffic fatalities. Since 1999, the number of opioid-related overdose deaths nationwide, including prescription opioids and heroin, has quadrupled. Tennessee is no exception to this epidemic. While progress is being made through the state’s Prescription for Success and Prescription Safety Act, Tennessee remains in the top 15 of all states in drug overdose deaths, and each year, more opioid prescriptions are written than there are people living in Tennessee, with more than 1 million prescriptions left over. This epidemic does not discriminate and knows no boundaries. It devastates families from all walks of life and harms communities across Tennessee. Together, we can and must do better.

This legislation, part of the TN Together plan to attack the state’s opioid epidemic, recognizes the work of multiple agencies and stakeholders, and with the governor’s proposed 2018-19 budget and other executive actions, aggressively and comprehensively addresses the issue through three major components: 1) Prevention, 2) Treatment and 3) Law Enforcement.

The legislation seeks to prevent opioid addiction, and ultimately, misuse and abuse by limiting the supply and dosage of opioid prescriptions with emphasis on new patients. Initial prescriptions will be limited to a 5-day supply with daily dosage limits (40 MME or “morphine milligram equivalent”). Higher dosages of opioids have been associated with higher risk of overdose and death while proving ineffective at reducing pain over the long term. The legislation also addresses appropriate exceptions, including exceptions for individuals undergoing active or palliative cancer treatment or who are receiving hospice care for chronic pain.

Along with a proposed, research-based increased investment in the 2018-19 budget of more than  $25 million (state and federal funds) for treatment and recovery services for individuals with opioid use disorder, the legislation provides incentives for offenders in correctional facilities to complete intensive substance use treatment programs while incarcerated. An increasing number of offenders suffer from substance use disorders. These evidence-based programs are proven to reduce recidivism and improve lives while saving taxpayer dollars.

In addition to proposed resources in the 2018-19 budget to attack the illicit sale and trafficking of opioids, the legislation updates the schedule of controlled substances to better track, monitor and penalize the use and unlawful distribution of dangerous and addictive drugs, including substances that mimic the effects of fentanyl, a drug that is up to 100 times more potent than morphine and is linked to an alarming number of overdose deaths.

Through this multifaceted approach, Tennessee can be successful in its continued fight against the opioid epidemic and reverse the addiction, overdose and illicit distribution trends that continue to plague the state and nation.

Learn more about the full TN Together plan to end the opioid crisis at www.tn.gov/opioids.

One-pager on TN Together

“Why now and why limits?" Graphic 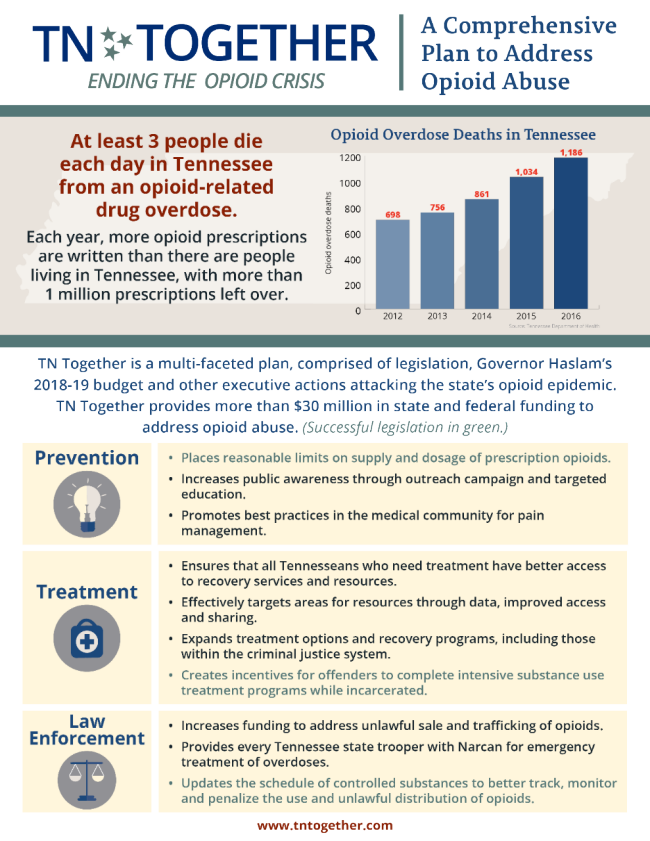 PDF of TN Together Infographic