NASHVILLE – The Tennessee Department of Correction (TDOC) is recognizing two security staff members for going above and beyond the call of duty in separate incidents that occurred last month.  Sergeant Cody Gatlin and Corporal Larry Keeton, both employed at the Turney Center Annex in Wayne County, were off work at the time of the incidents, but without hesitation, sprang into action to protect the lives of others.

On May 17, 2022, Sergeant Cody Gatlin was travelling with his family on vacation when he witnessed a black SUV run a stop sign, T-boning a van and causing it to spin multiple times and almost flip before landing directly in front of his family’s car.  Without pause, Sgt. Gatlin immediately exited his vehicle and began rendering aid to a pregnant woman and her 2-year daughter who were inside the van, both of whom sustained minor injuries in the accident.  Sgt. Gatlin then proceeded to the black SUV to render assistance to the other party, where he found the occupant trapped and unable to feel her legs.  While he and other bystanders were unable to remove the driver of the SUV, Sgt. Gatlin remained onsite until police and first responders arrived on scene and took over.

Just two days later in a separate incident, Corporal Larry Keeton was off duty, pumping gas at the Quick-Mart in Waynesboro, TN when he observed a young man pull into the parking lot and walk into the convenient store with a loaded .45 caliber handgun in plain sight in his waistband.  When the man came out, he fired 2 shots into the concrete ground, striking himself in the foot in the process.  The man then got up, walked to the side of the gas station, sat down and eventually tossed the gun away.  Concerned the man may try to hurt himself again or others in the area, Cpl. Keeton approached the man at the side of the store and restrained him until police arrived and took the man into custody.

“If you were to talk to either one of these men, they would probably say their reactions were purely instinct,” said Commissioner Lisa Helton.  “I on the other hand think it’s a deep-rooted passion to serve and protect others.  Their actions were valiant and selfless, and I am proud to have Tennesseans like them working at TDOC.” 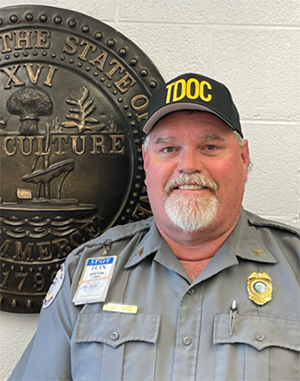