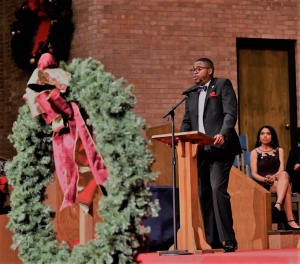 NASHVILLE – For the 17th consecutive year, families of homicide victims honored their lost loved ones during the annual “Tennessee Season to Remember” Thursday evening. The First Lady Maria Lee was joined by many state and local public safety officials for the ceremony at First Baptist Church in downtown Nashville.

The keynote speaker featured Mychal Austin of Nashville, Tennessee, the youngest son of longtime Tennessee Department of Correction (TDOC) administrator Debra Johnson, who was murdered by a prison escapee on August 7, 2019.

“Although a somber occasion, I am comforted by those of you I’ve met and seen, knowing this unique ordeal that my family and I have been tasked to deal with does have positive, angelic, and optimistic faces after such a traumatic and life-altering event,” Austin said.

“As I reflect on the reason that I am here, the tragic murder of my mother, Correctional Administrator Debra Kay Johnson, I am reminded of her grace and class during an illustrious 38-year career in the Tennessee Department of Correction, where she touched many of her colleagues, inmates and the communities that she serviced throughout the state of Tennessee.”

Families from across Tennessee placed ornaments on memorial wreaths in honor of their loved ones and the wreaths will be displayed in the Tennessee State Capitol throughout the holiday season.

Cathy Gurley, the CEO of victim advocacy group You Have the Power, placed the first ornament on the wreaths on behalf of Andrea Conte, the founder of the Tennessee Season to Remember. Conte started the memorial ceremony as a way to honor homicide victims.