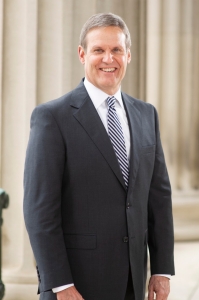 As a seventh-generation Tennessean, Bill’s roots run deep in this state. He was raised in Franklin where he still resides today with his wife Maria on his family’s farm. He’s the proud father of four adult children (Jessica, twin sons Jacob and Caleb, and Sarah Kate) and five grandchildren.

After attending Williamson County Schools, Bill went to Auburn University, where he studied Mechanical Engineering. When he graduated, he returned home to Franklin to join the family business his grandfather started in 1944. Through hard work, Bill learned what it takes to lead a company, doing what is necessary to help build a business and create jobs. He held several roles at Lee Company before becoming President of the company in 1992.

Under Bill’s leadership, the company grew into a comprehensive facilities solutions and home services company. It now employs more than 1,200 individuals and it has won numerous awards for work
culture and business accomplishments. Bill was named a “Most Admired CEO” in 2015 by the Nashville Business Journal.

Bill has said throughout his campaign that he woke up every morning focused on how to make life better for his employees, and now he’s excited to get to work to wake up every morning trying to improve the lives of 6.5 million Tennesseans.As Governor, Bill is focused on several priorities including good jobs, great schools, and safe neighborhoods so we can keep Tennessee moving in the right direction. Tennessee is one of the best places in the country to live and work, and he is going to work hard every day to try to make life even better.

Maria was raised in Silver Spring, Maryland and attended the University of Maryland, where she studied Elementary Education. It was her passion for service that brought her to Tennessee to lead girls in a discipleship group within the youth ministry at Christ Presbyterian Church. She stayed in Tennessee to become a third and fourth grade teacher. Maria and Bill were married in 2008.

Bill and Maria are people of strong faith. They are active in Grace Chapel Church and in numerous faith-based ministries, which have taken them all over the world to serve people in need, including to Africa, Central America, and the Middle East.