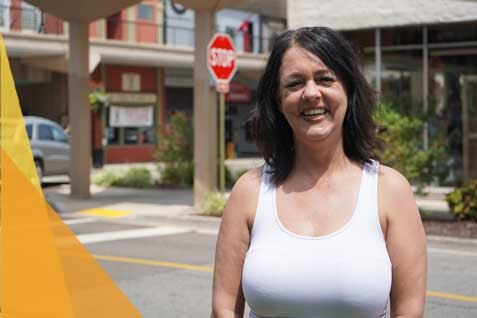 I tried my first drug at 19 years old, and within a year I had also received my first felony. At that point, I lost everything. I continued on this road until I received eight felonies and entered into the Fourth Judicial District Drug Recovery Court in April 2014. After being in drug court, I started working at a medication assisted treatment center, then received my Certified Peer Recovery Specialist certification. I managed the office for three years. I have led several trainings and traveled to other states. I’m now working at Helen Ross McNabb as a navigator and am a student at Bethel University working on a B.A. in human services. My story continues! I was born into a dysfunctional home with an alcoholic father, and a mother who never used drugs or drank alcohol in her life and had little tolerance for it. My parents divorced when I was three years old, but they continued to live together for several years with my two older brothers. I saw fighting, heard arguing, felt tension and anxiety, but was taught I had to act like everything was normal at home and learned to ignore my feelings. I believe my outlook on life, men and relationships was never healthy.

My mom bought a house when I was eight years old, and everyone moved into it with the exception of my dad. She did not allow him there, and I remember feeling grateful but confused. As I got older, I started to act out in behaviors that were a direct result of my feelings and beliefs at a young age. I never felt part of anything or any group. I believed men defined who I was. I was always looking for something to believe in and be part of.

Mom worked in a hot factory, kept the house clean and took care of us as a single mother. She was a great provider, but she didn’t know how to control me. She had to work so many hours to keep us fed and have a roof over our heads so there was little time for affection. I began smoking marijuana and drinking beer at 12 years old. I was looking for something to cure my insecurities and self-hatred. At 14 years old my mother took me to a therapist, and I was diagnosed as clinically depressed. I chose not to continue treatment and instead opted to self-medicate with alcohol, drugs, starvation and boys. Nothing I tried eased the internal pain and insecurities.

I became pregnant at 20 years old, and after I gave birth to my son I was prescribed Hydrocodone. FINALLY, I found what I was looking for to ease my low self-esteem, self-hatred, anger and rage. The world quieted down, my mind became content, I wasn’t mad, I wasn’t sad and I was able to focus on things. I was mentally and emotionally hooked IMMEDIATELY. As with any story of drug abuse, it became worse. I cannot explain in depth what happened, but the final years of my addiction were extremely difficult. My boyfriend hanged himself, another boyfriend overdosed and then my husband died. I myself overdosed on Fentanyl patches and wound up in the intensive care unit pumped full of Narcan. I was arrested several times for drug and theft charges. My son stayed with my mother because I was unable to take care of him due to repeatedly being in jail. None of these things was enough to quiet the scream of my addiction to opiates until I was put in jail with no chance of being released before the withdrawals started. I had horrible withdrawals in jail, and that definitely woke me up.

I applied for the Hamblen County Recovery Court and was accepted in October 2007. I relapsed several times while in the program because I hadn’t worked on my internal battles. I was sent to inpatient treatment and stayed for a year in a halfway house, but I finally graduated from drug court. I had been clean two and a half years, but then I relapsed for a short period of time. Because of the love, compassion, understanding and care the Recovery Court team showed me, I was able to get back on track. I have now been clean more than eight years. I attend 12-step meetings, I have a sponsor and I have a strong network of people in recovery who help guide me.

Now, I work for Hamblen County Recovery Court, and I am able to give back the gifts I was given.

I strongly believe I was born with an addictive brain, and my choices and subsequent life experiences led me to opiate addiction. My Higher Power, however, led me from active addiction. My brain has not forgotten the euphoria of opiates, and it reminds me in my dreams when I am under stress. My spirit though reminds me where the opiates take me. I stay involved in a recovery program because it has been my best defense against addiction.