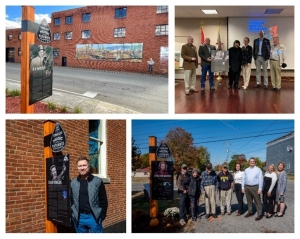 A keeper of African American string tradition, Howard Armstrong was a multi-instrumentalist with an extensive repertoire. He was also a multilinguist, painter and a teller of folk tales and anecdotes drawn from his long life and career. Armstrong was honored on Oct. 18 with a marker in downtown LaFollette. His son, Ralphe Armstrong, and Mayor Jack Lunch were in attendance.

TDTD and Johnson County Center of the Arts honored G.B. Grayson with a marker on Oct. 18 in downtown Mountain City with special performances by Kody Norris and Kenny Price. The new marker is the latest addition to the “Musical Heritage Mural Mile” walking tour through downtown Mountain City. The self-guided mural tour connects Johnson County residents and visitors alike to a storied history of authentic Appalachian music, including Clarence "Tom" Ashley, Blind Fiddler, G.B. Grayson, who first recorded the Ballad of Tom Dooley, plus Fred Price and Clint Howard, who introduced the young Doc Watson to the world.

Alongside the City of Orlinda and Robertson County, Tennessee Tourism honored country music industry pioneer Jo Walker-Meador on Oct. 21 with a new marker on the Tennessee Music Pathways. As executive director of the Country Music Association (CMA) from 1962 until 1991, Jo Walker-Meador’s career mirrored the growth of the industry she led. She became a tireless proselytizer for country music. Under her leadership, the Country Music Hall of Fame, the CMA Awards, and Fan Fair (later CMA Music Festival, now known as CMA Fest) were established, in addition to many industry initiatives. 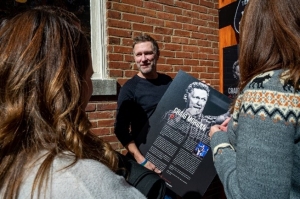 On Oct. 18, TDTD and Dickson County honored country music star Craig Morgan with the unveiling of a “Tennessee Music Pathways” marker next door to the Clement Museum Hotel. Craig Morgan, a longtime resident of Dickson, attended the unveiling and held a book signing for his new memoir, “God, Family, Country.” A multi-faceted entertainer, Morgan has made a name for himself as a country music icon, TV personality, celebrated outdoorsman and patriotic Army veteran. With over 25 charted Billboard songs, Morgan is widely known for massive hits “This Ole Boy,” ”Almost Home," "Redneck Yacht Club," "That's What I Love About Sunday," "Little Bit of Life," “Wake Up Lovin’ You,” “International Harvester” and “Bonfire.” A proud member of the Grand Ole Opry since 2008, he has made over 250 appearances on the hallowed stage.

On Tuesday, Oct. 25, Little David Wilkins was honored in Parsons with a new marker. As a country singer, songwriter and entertainer, Wilkins scored 17 country hits. His composition, “Coming On Strong,” was a No. 11 pop hit for Brenda Lee in 1966, and he wrote songs for artists as diverse as soul singer Percy Sledge; country star Conway Twitty; and folk-pop group, the Serendipity Singers. Wilkins was also a nightclub performer and worked as a supporting artist to several major country stars.

Nearly every town in Tennessee has a story when it comes to music. Tennessee Music Pathways is a guide that connects visitors to the rich musical heritage of our state. From the largest cities to the smallest communities, the Pathways stretches across all 95 counties and features hundreds of landmarks and attractions from the seven genres of music that call Tennessee home: blues, bluegrass, country, gospel, soul, rockabilly and rock ‘n’ roll. Everyone knows about Elvis Presley in Memphis, the historic Ryman Auditorium in Nashville and Dolly Parton’s East-Tennessee roots; but there is a deeper story to be told. From rockabilly to sacred music – our musical history is statewide, diverse and deserves to be heard. This is what makes Tennessee the “Soundtrack of America.”