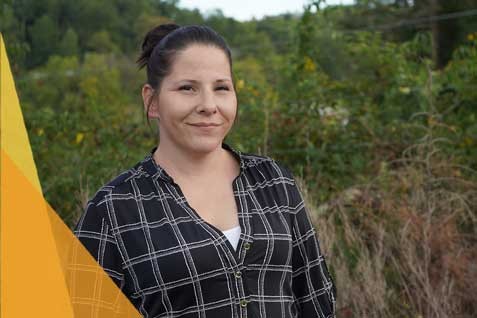 I was broken and hopeless. I fought for 10 years trying to prove to myself and everyone around me that I didn't have a problem, I could control it and quit if I wanted to.  All it did was almost kill me. My pride almost killed me. When I finally decided I had enough, it was too late. This addiction had consumed me. This disease, "my disease," is insidious. It gave me a false sense of well-being. While it grew quietly inside of me without warning, it ambushed me.

My husband had passed in a boating accident. He was trying to save our son from drowning because he didn't know how to swim. Our son got to a safe space, but my husband had water that got into his lungs. Friends that were with him tried to do CPR but were unsuccessful. When the rescue squad made it, he was already gone. Our son witnessed it all. It broke my heart seeing him grieve. I was distraught. We have two children. Our son was six at the time, and our daughter was a month from her first birthday. Emotionally I could not function. I suffered severe anxiety and fear. I developed Panic Disorder and it became debilitating. My family doctor prescribed anti-anxiety medication for me, but it kept me out of it so I stopped taking it.

Then, I had dental work done and was prescribed Hydrocodone. From the first pill, I knew I was going to continue to take them. It relieved my anxiety, gave me energy and kept me emotionally numb for years. I was 25 and had never had a problem with substances until that time. I suffered a lot of consequences while in active addiction. So did the people closest to my heart. I harmed so people because of my actions, sometimes without even realizing it until it was too late. I quit college, lost custody of my children, lost my home, was unemployable, and I lost my sense of self-worth and respect.

I put my life and others in danger. I wrecked several times driving high. One particular time my children were with me, and, by the grace of my Higher Power, they were not physically injured. I stayed in a very unhealthy and abusive relationship for eight years because of co-dependency that was fueled by my addiction. I was in and out of jail several times, and I even took a felony charge for my abuser. I didn't realize it at the time, but I lost my identity years before then and didn't come to terms with that until I was clean. I realized I had no clue who I was. I was scared, and, for the first time in my life, I couldn't run from myself. I kept trying though.

I knew I was dying. I fantasized about how I could do it and how to not make it hurt. I had a plan. In my mind, I believed it was the only way out, and I was tired of fighting. I just wanted the pain to be over. I had given up all hope and never imagined I could be happy again. The drugs stopped working. They turned against me. That sense of "well-being" became a constant feeling of impending doom.

During the lowest point in my life, I had a moment of sanity. I was either going to live or die. There was no choice and no middle of the road for me. This was the day I became completely honest with myself. The desperation became my strength. I surrendered. I needed help, and that was the day I reached out.

My clean date is, JUNE 17, 2016. I went to a sober living home and began working a 12-step program. I had no clue what I was doing. I was full of fear and hated change, but I saw something inside and outside of the rooms. I saw hope. I saw love. The people surrounding me were recovering, happy, and they had been where I was. I wanted to figure everything out and had a million questions. I had nothing to lose. I started trusting the process and taking suggestions, even if it didn't make sense. I got a sponsor and started working the steps. I started learning how to live again, learning who I really am, what my morals are and what I valued. I learned to use my voice. I started loving myself, who I was, and who I am today. I was no longer ashamed about where I had been. I was told I will never figure everything out and I didn't have to. I also have learned I can't control everything and to trust my Higher Power has got this!

Life has changed so much today. It has been a beautiful journey so far. I have a few good friends, a wonderful fiancé, and they have all been a huge motivator and inspiration to me. The 12-steps of recovery and fellowship saved my life. I never thought I would be reasonably happy again, yet I have gained so much more. Today relationships are being restored. I have a great relationship with my children…being present and making good memories. I was able to see my daughter's first day of high school, formal dance, teach her how to drive and be with her when she received her driver’s license. I saw my son walk across the stage and receive his high school diploma, graduate from the Police Academy, get his first apartment and purchase his home. My youngest son and I are building a relationship and forming a stronger bond.

WOW, I'm blessed. I have worked so hard on myself, my recovery and my career. I work in recovery today. I actually work where it all began for me. I am a strong advocate for recovery, harm reduction, Narcan, Medication Assisted Treatment, prevention, education, intervention and reatment and all paths of recovery! Medication kept me alive long enough to sit still and hear the message. I will SCREAM it if there is a chance it may reach a suffering addict. I came from a hopeless state who thought suicide would be the only way out. If my story helps just one person, then it was worth it to be honest not just with myself but the world around me. No one has to die from this disease and no one has to ever be alone. If you are suffering please reach out!