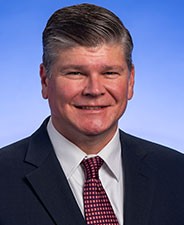 Curtis Sutton has served as the Executive Director of the Tennessee Emergency Communications Board since 2014. He previously served as the Board’s Assistant Director and General Counsel. Prior to joining the Board, he was a partner with the law firm of Ferreri & Fogle.

As Executive Director, Mr. Sutton is responsible for executing the Board’s mission and providing leadership and direction in the planning and development of the Board’s programs, including Tennessee’s Next Generation 911 system. During his tenure the Board has won several awards including the 2021 Agency of Distinction Award from the Arc of Tennessee, the 2017 Outstanding Call Center/Program Award from the NG9-1-1 Institute, the 2017 Leading the Way Award from the 911 Education Foundation, and a Special Achievement in GIS Award from Esri in 2016.

Mr. Sutton is a graduate Western Kentucky University and the University of Kentucky College of Law. He is licensed to practice law in Tennessee and obtained his Emergency Number Professional Certification (ENP) in 2013. He is a graduate of LEAD Tennessee, the Tennessee Government Executive Institute, and NENA’s Center Management Certification Program. Mr. Sutton served on the board of the national NG9-1-1 Institute from 2017-2019.