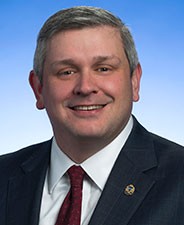 Mr. Kain has a distinguished law enforcement career. Most recently, he served the entire Tennessee Board of Regents system as Assistant Vice Chancellor for Campus Safety and Security. Beginning in 2019, Mr. Kain was Director of Public Safety and Chief of Police for Roane State Community College. He has also served local governments including work as Chief of Police for the cities of Norris and Baneberry. Mr. Kain also has experience as a professional educator. Since 2014, he has taught criminal justice as an adjunct instructor at Roane State Community College and as an adjunct instructor at Tennessee Tech University.

A native of Tennessee, Mr. Kain is a graduate of TLETA Class 1465 in 2021. He received a Bachelor of Science from the University of Tennessee at Knoxville in 2006 and a Master of Science in Criminal Justice Bethel University in 2014.