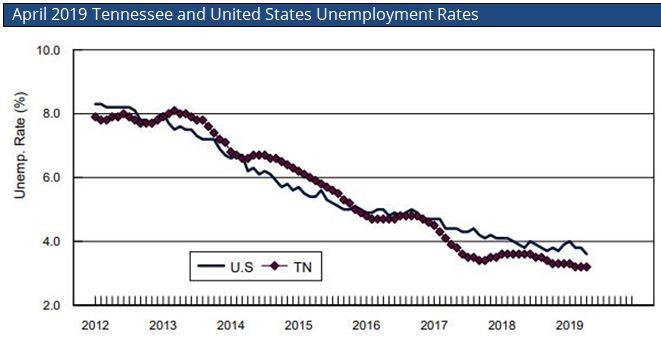 NASHVILLE - For the third consecutive month, Tennessee's preliminary statewide unemployment rate remains at its all-time low of 3.2 percent, according to data released today by the Tennessee Department of Labor and Workforce Development (TDLWD).

Tennessee first set its all-time low unemployment rate in February and it has remained at a seasonally adjusted 3.2 percent each month since establishing the record. Over the last 12 months, unemployment across the state dropped by 0.4 of a percentage point when compared to data from April 2018.

The April preliminary unemployment rate for the United States stands at 3.6 percent, which is 0.2 of a percentage point lower than March's national rate.

The statewide and national unemployment rates are seasonally adjusted to eliminate the influences of weather, holidays, the opening and closing of schools, and other recurring seasonal events from an economic time series.

You can find a complete analysis of the April 2019 unemployment rate for the state of Tennessee here.

Tennesseeans searching for new employment can log on Jobs4TN.gov, the state's workforce development website. It has over 150,000 active job listings, as well as free online resume assistance, job interview skills training, and other best practices to help with job searching.