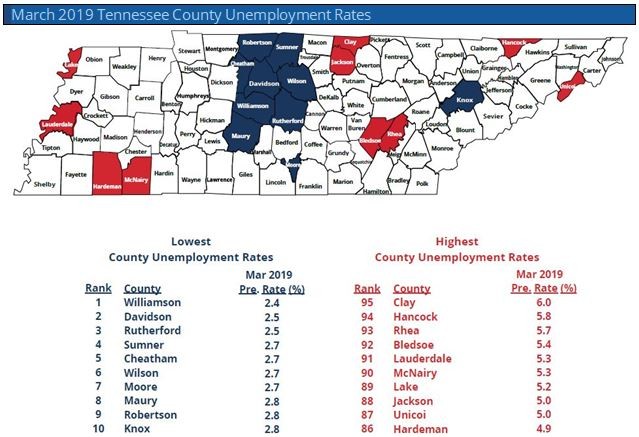 NASHVILLE – Eighty of Tennessee’s 95 counties recorded an unemployment rate in March 2019 that is lower compared to the same time last year according to newly released data from the Tennessee Department of Labor and Workforce Development (TDLWD). Also, in the year-to-year comparison, the rates in nine counties held steady, while six counties saw increases.

Comparing March 2019 statistics to the previous month, 69 counties experienced a slight uptick in unemployment, while rates decreased in 17 counties and remained the same in nine Tennessee counties.

“Even though many counties did see a small increase in their unemployment rates, Tennessee continues a pattern of low unemployment,” said TDLWD Commissioner Jeff McCord. “Unemployment in many areas of the state mirrors or is even lower than it was the same month last year.”

Davidson and Rutherford counties follow with a March rate of 2.5 percent. The latest statistics represent a 0.2 of a percentage point increase for both counties, but the current rates still best their March 2018 numbers.

Clay County has the state’s highest unemployment rate in March at 6.0 percent, up 0.7 of a percentage point from the previous month. The latest rate is also up 0.8 percent from March 2018.

Hancock County follows Clay with the second highest unemployment rate in the state. The county’s latest rate mirrors its number from February, but it is up 1.0 percentage point from this month last year.

Statewide, unemployment remains at a historic low in Tennessee. The March 2019 seasonally adjusted rate of 3.2 percent is unchanged from February when unemployment reached an all-time low in the state.

Across the nation, unemployment in March also remained the same as the previous month at 3.8 percent.

County unemployment rates are not seasonally adjusted, while the state and national rates use the seasonal adjustment to eliminate outside influences on the statistics.

A complete analysis of the March 2019 county unemployment data is available here. You can find additional information about Tennessee labor statistics on the state’s workforce development website, Jobs4TN.gov.