Many Counties Experience a Significant Decrease in Unemployment during November 2018 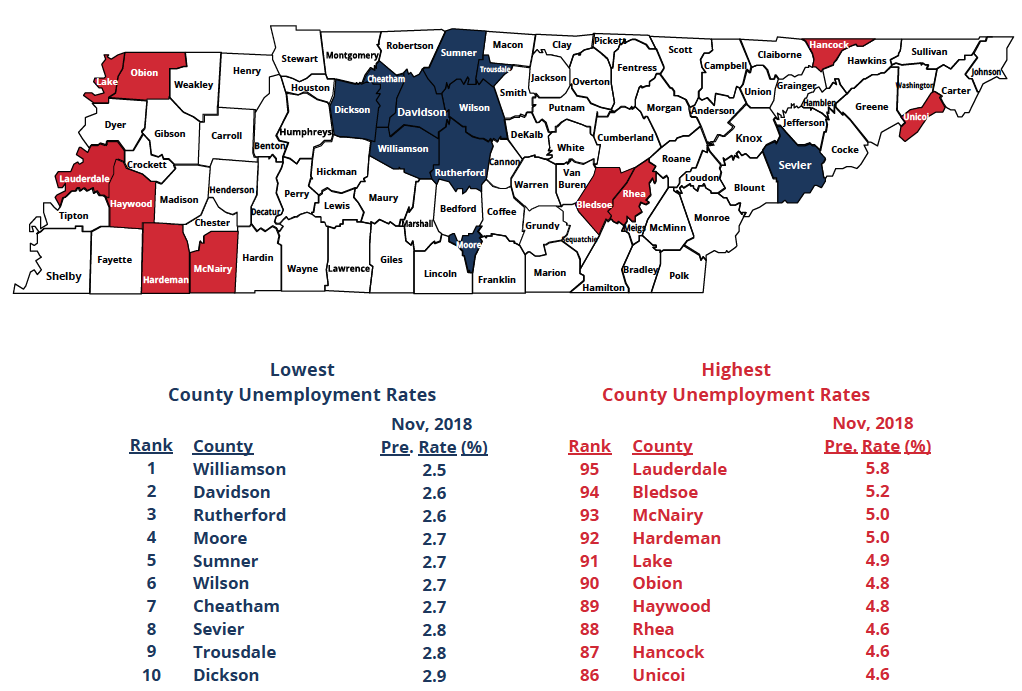 NASHVILLE – Each of Tennessee’s 95 counties experienced lower unemployment in November 2018 according to newly released data from the Tennessee Department of Labor and Workforce Development (TDLWD).

Williamson County had the state’s lowest unemployment rate at 2.5 percent, which was 0.2 of a percentage point lower than the previous month. Both Davidson and Rutherford counties had a rate of 2.6 percent in November, a drop of 0.3 percent for each county.

The 10 counties with the lowest unemployment each had a rate of 2.9 percent or lower in November.

“It’s very encouraging to have so many counties with unemployment rates below 5 percent during November,” said TDLWD Commissioner Burns Phillips. “That means more Tennesseans were working and taking home a paycheck as we headed into the holiday season.”

The counties with the state’s highest unemployment still experienced significant drops in their rates. While Lauderdale County had the highest jobless rate in November at 5.8 percent that figure is a percentage point lower than the previous month. Bledsoe County’s unemployment rate dropped nearly a full percentage point from 6.1 percent to 5.2 percent. McNairy County went from 5.5 percent in October to 5 percent in November.

The November 2018 unemployment data for each of Tennessee’s counties can be found here.

Tennesseans searching for employment can access the state’s workforce development website where they will find a wide range of helpful information and services.