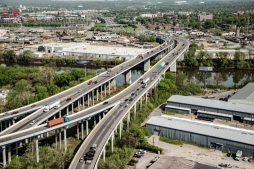 TDOT is preparing for another big project in downtown Nashville using the innovative process of Accelerated Bridge Construction (ABC). The $28.5 million project will replace two bridges on Interstate 24, between Spring Street and the Silliman Evans Bridge, along the eastern loop of downtown Nashville in Davidson County.

Originally built in 1961, the I-24 bridges over Spring Street and Oldham Street are suffering from advanced stages of deterioration and need immediate attention. The ABC process being used to replace the bridges requires short-term, total road closures, giving crews enough space to do their jobs and the freedom to work around the clock. This process will allow construction to be finished in months instead of years.

The temporary closures needed for the bridge repairs will also allow crews to rehabilitate the roadway pavement through this section of interstate, including pavement and deck repairs on the Silliman Evans Bridge over the Cumberland River.

This project will provide a safer commute for the more than 148,000 vehicles that travel this section of I-24 every day, as well as the motorists who travel under the bridges. Construction is expected to be finished by June 2018.

For the planned rehabilitation project, a portion of the downtown loop will be closed to all traffic for at least FOUR weekends between summer 2017 and summer 2018. During the scheduled closures, I-24 will be closed from the I-24/I-65 split north of downtown to the I-24/I-40 split south of downtown. The interstate detour will remain the same for all four weekends. Additionally, various parts of the project will be done at night and during off-peak travel times and may require temporary lane closures. Detours on local streets will be dependent upon specific bridge work. Interstate and local access maps are provided below. Bicycle and pedestrian traffic should follow directional signage near the work zone.