In accordance with Federal Highway Administration and National Environmental Policy Act (NEPA) standards, TDOT held public meetings on Tuesday, March 16, and Thursday, March 18, 2021, on the proposed project for SR 29 (US 27) in Scott County. Due to concerns about the COVID-19 pandemic, the meetings were hosted online using Zoom software.

Quick links to attend each meeting are provided below. Participants are encouraged to join the meeting a few minutes early to test connections via personal phone or electronic device.

The proposed project for State Route 29 (US 27), from near Wolf Creek Road to near State Route 63 in Scott County, consists of widening the existing route to a five-lane facility, allowing for a dedicated center turn lane, for approximately 9.1 miles. The proposed design closely follows the existing alignment with a proposed new alignment to the north or the south of Robbins to minimize environmental impacts. 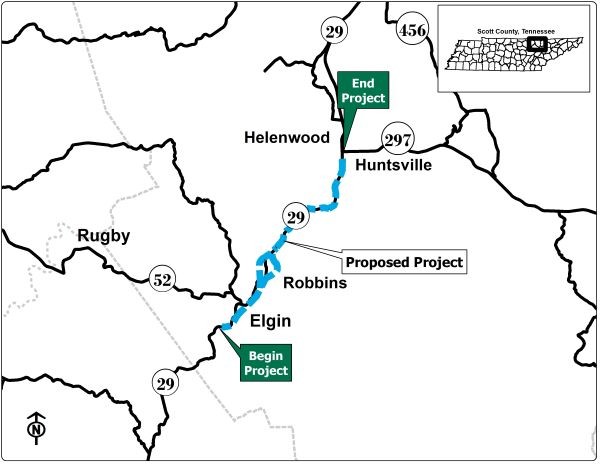 SR 29 is the only north-south connector in Scott County. The existing highway is used by local and regional travelers, serving communities like Robbins and providing access to the communities of Sunbright and Wartburg to the south (Morgan County) and Oneida and Winfield to the north (Scott County). It serves commercial, residential, and recreational traffic. The corridor also provides a potential alternate route to I-75.

Additionally, the route is also located in an economically distressed country, as identified by the Appalachian Regional Commission (ARC). The county’s industrial parks are located immediately adjacent to or near SR 29. The availability and reliability of infrastructure is critical to industries when considering the county for new facilities.

The purpose of the proposed project is to improve the safety, operation, and efficiency of the corridor by widening the route and correcting geometric deficiencies. Improvements would also accommodate current and future traffic demands, provide regional connectivity, and support economic development.

The proposed design for SR 29 includes construction of a five-lane facility with two 12-foot travel lanes in each direction, a center turn lane, and 10-foot paved shoulders with variable right-of-way widths.

Various design options, or build alternatives, are being studied regarding the proposed improvements to the route. Outlined below are the specific design features of each Build Alternative.

Due to the significant size and cost of the project, the proposed improvements will be separated into two smaller sections with multiple phases as outlined below.

Phase 1 includes construction of two 12-foot travel lanes with 12-foot shoulders on new location. Truck climbing lanes and turn lanes will also be constructed along the route. Approximately 250 feet of variable right-of-way will be purchased to accommodate Phase 2 construction.

Phase 1 does not include construction activities but would include the purchase of 25 to 35 feet of right-of-way on either side of the roadway to accommodate Phase 2 construction.