No appointment is necessary to attend the May 24, 2022 NEPA Public Hearing since the hearing will be held in an auditorium/gymnasium setting.

*Please note that the presentation and other hearing materials are the same as those provided at the April 12, 2022 Virtual Question and Answer Session and the April 14, NEPA Public Hearing held at the Newport Community Center.

The EA can be viewed on this website (Environmental Assessment) and at the following locations:

Persons with a disability who require aids or services to participate at the hearing may contact Ms. Shanna Waelty at the following address no later than ten (10) days prior to the date of the hearing:

If you have a comment or question, please use one of the following methods to contact TDOT:

Questions About the Project- Please call 888-283-4678 (toll free) through June 14, 2022 and leave a voicemail message with your name, phone number and question. Questions will be responded to within 7 business days by a TDOT representative.

If you have a question that needs to be answered before providing your official comment on the project, please make sure to call the number above by June 3, 2022 in order to allow TDOT time to respond to your question.

Letter- Mail a written statement postmarked by June 14, 2022, to the following address:

The Tennessee Department of Transportation (TDOT), in cooperation with the Federal Highway Administration (FHWA), is proposing to improve State Route (SR) 32 (US-321) from SR-73 to the existing 4-lane divided section of SR-32 (US-321) north of Wilton Springs Road in Cocke County, Tennessee. The proposed project is approximately 7.1 miles in length. The proposed project would be constructed in part with funding from FHWA and is therefore subject to the requirements of the National Environmental Policy Act (NEPA). 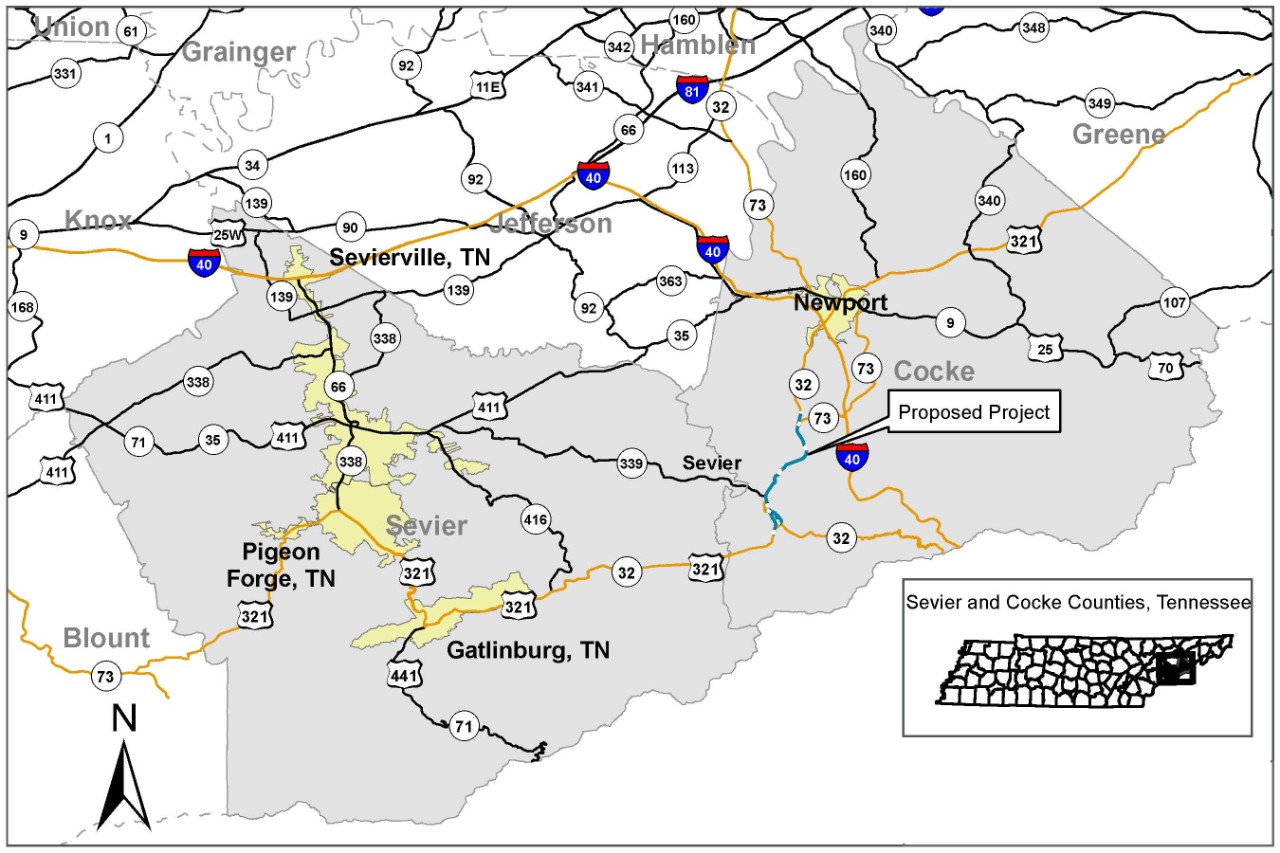 In 1987, a TDOT Advanced Planning Report (APR) outlined proposed improvements to the SR-32 corridor from SR-73 (also called Hooper Highway) at Cosby to I-40 at Newport (Exit 435). In the late 1980s, TDOT acquired right-of-way for a four-lane facility for a section of the project identified in the APR from Wilton Springs Road (also designated as SR-73) to I-40 at Newport (Exit 435) (TDOT PIN 107349.00). At that time, a five-lane section from just north of Epley Road to I-40 (a distance of about 0.5 mile) and two lanes of the proposed four-lane roadway from Wilton Springs Road to just north of Epley Road were constructed.

NEPA studies for the SR-32 (US-321) project from SR-73 to Wilton Springs Road were initiated in 1998. The original Build Alternative started on SR-73 west of the SR-73/SR-32 intersection and traveled on new location west of existing SR-32 to Foothills Parkway. From the Foothills Parkway, it essentially followed the existing SR-32 roadway until Deer Foot Road, where it then traveled on new location east of existing SR-32 to the northern project terminus at Wilton Springs Road. Following a public meeting on June 29, 2010 and a presentation to the Tennessee Environmental Streamlining Agreement (TESA) agencies in August 2010 a second Build Alternative was proposed for consideration.

In 2012, TDOT initiated an Expedited Project Delivery (EPD) review of the project to identify feasible, cost-effective improvement options that would provide improved safety and mobility in the corridor.  A public meeting was held on March 15, 2012 to obtain public input regarding the two alternatives under consideration at that time, and an agency field view was conducted on September 25, 2012.  Based on recommendations in the EPD technical report, agency coordination, and public input from public meetings, TDOT developed a third potential Build Alternative. Two of the three potential Build Alternatives – Build Alternatives A and B – are currently being considered for the project.

TDOT has prepared an Environmental Assessment (EA) in accordance with the National Environmental Policy Act (NEPA), which identifies and evaluates the environmental impacts of the proposed Build Alternatives. The EA was approved by the Federal Highway Administration (FHWA) on March 16, 2022. Results of the technical studies are included in the approved EA, which is available for review, and will presented in a NEPA Public Hearing scheduled for April 14, 2022. A public comment period will follow Public Hearing. For more information on scheduled meetings, meeting materials, or public comments, visit the Public Involvement section of the project website.

The needs for the proposed project include:

·         Improve SR-32 consistent with the legislative intent of the “Improving Manufacturing, Public Roads, and Opportunities for a Vibrant Economy” (IMPROVE) Act; and

The purpose of the project is to:

·         Improve connections/access to high tourism areas within the region; 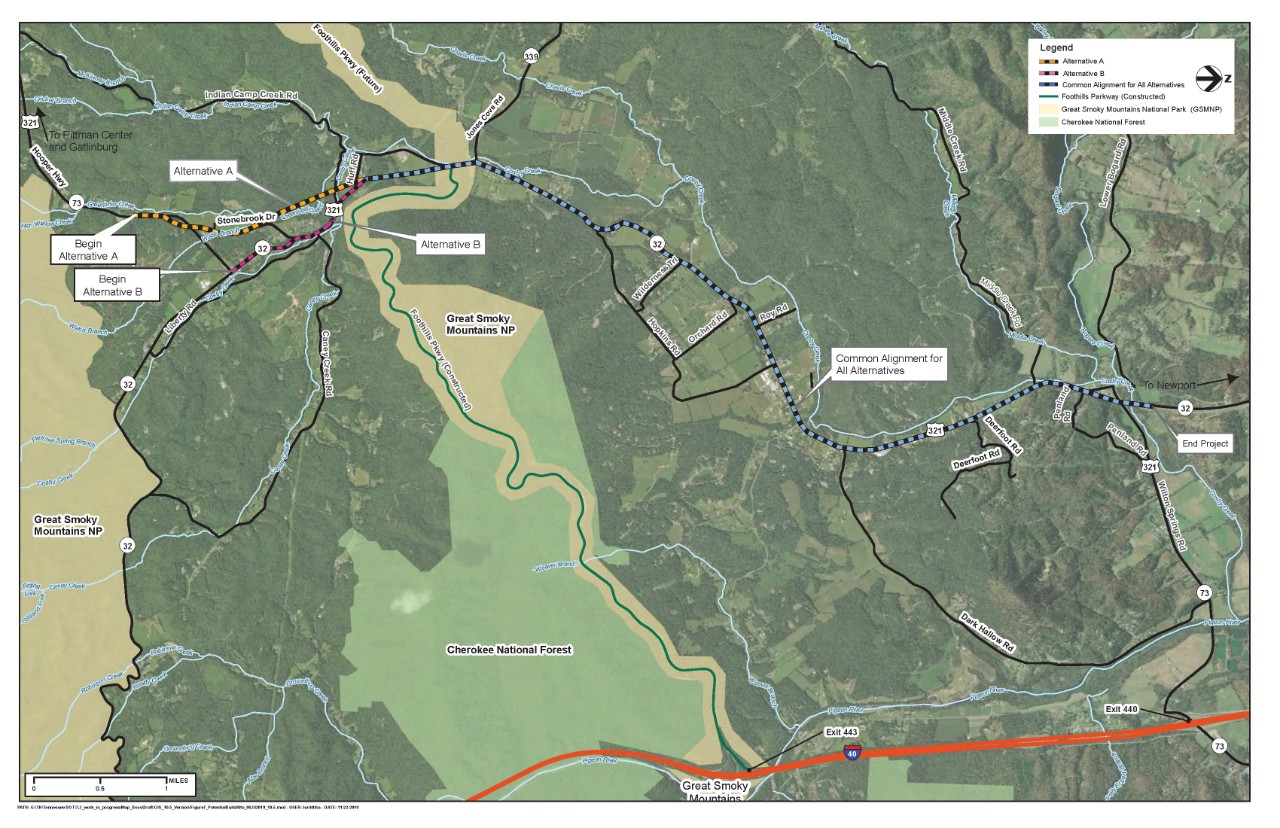