Various construction options, or Build Alternatives, were studied regarding the proposed Pellissippi Parkway Extension. The primary goal of selecting a Build Alternative is to avoid or minimize socio-economic and natural environment impacts to the greatest possible extent. In 2012, a Preferred Alternative was selected.

Modification of the Preferred Alternative

Following the selection of the Preferred Alternative in 2012, the Phase II archaeological investigations revealed one site that has been determined to be eligible for the National Register of Historic Places. Since the Preferred Alternative had already been analyzed and selected over the other Build Alternatives, TDOT focused on identifying potential avoidance options via minor alignment shifts in the vicinity of the sensitive portion of the eligible archaeology site, rather than major shifts of the alignment. TDOT identified and investigated two possible minor shifts in the route of the Preferred Alternative, between Davis Ford Road and US 321/SR 73 (the southern end of the project). TDOT investigated potential archaeology, noise, ecology, farmland, relocations, and environmental justice impacts for each shift.

The design features of each alignment shift would be the same as defined for the Preferred Alternative: a four-lane divided roadway with a 48-foot depressed median. The avoidance shifts would each be about 1.4 miles in length.

The two potential alignment shifts, and the impacts of these shifts, were presented to the public at a Community Briefing held on May 30, 2013, in the project area. The meeting was attended by 136 persons, and approximately 150 comments were received.

On July 29, 2013, TDOT announced the west alignment shift at the southern end of the project had been selected to modify the Preferred Alternative. In making the determination of the alignment shift, TDOT considered the amount and type of impacts of each shift and the potential to mitigate adverse effects. TDOT also gave consideration to public input received during the May 30th Community Briefing and the associated comment period.

The reasons for the selection of the west alignment shift are as follows.

While there would be adverse impacts within Kensington Place with the west alignment shift, TDOT and FHWA have determined through an environmental justice analysis that these impacts would not change the finding of the approved Draft Environmental Impact Statement (DEIS), and that the project would have no disproportionately high and adverse impacts to minority and low-income populations compared with the rest of the corridor, pursuant to Title VI of the 1964 Civil Rights Act and Executive Order 12898. 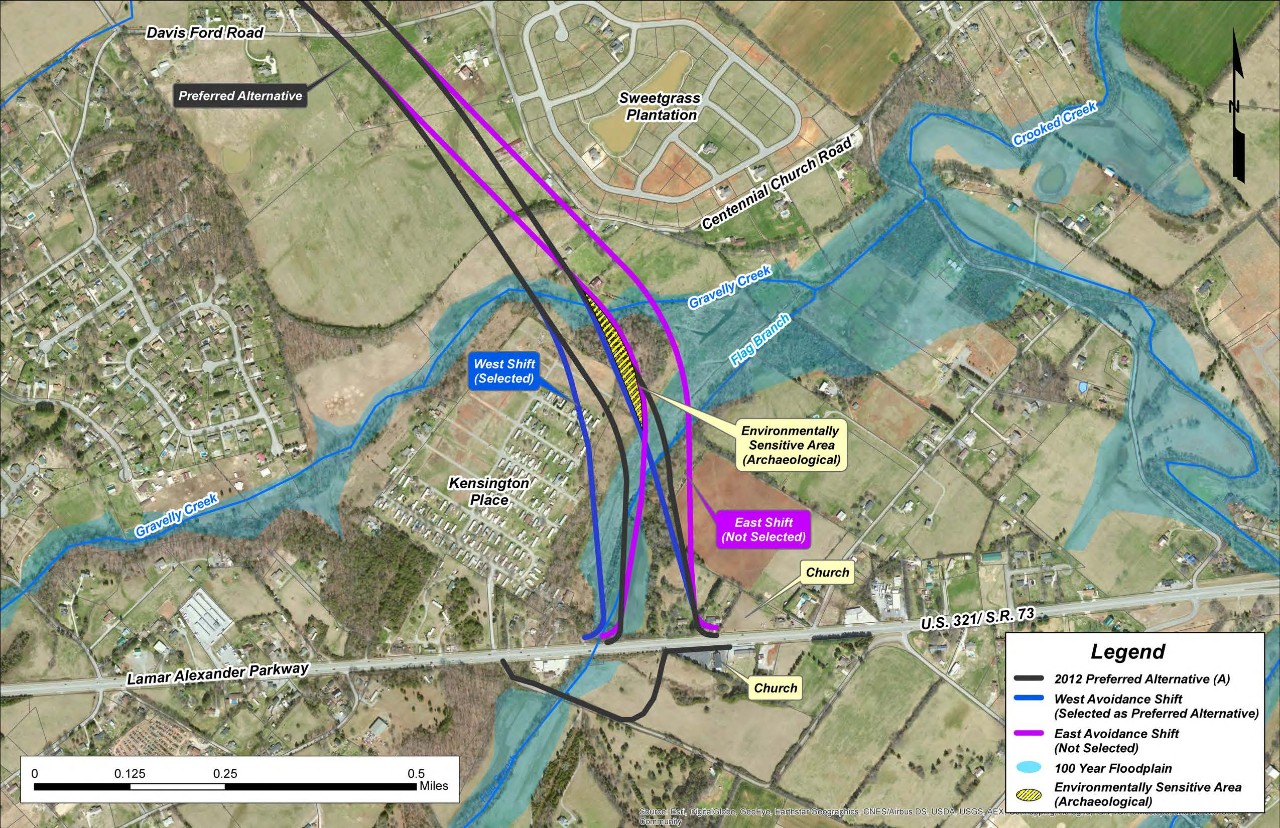 Conceptual plans for the Modified Preferred Alternative (with the west alignment shift) can be downloaded here or viewed at the following locations.

NOTE: Build Alternatives (including alignments) are conceptual during the required National Environmental Policy Act (NEPA) evaluation process, and these conceptual plans are subject to change. A Preferred Alternative concept in the Environmental Phase of a project is not yet a final design. Once detailed engineering plans are prepared and field surveys are conducted, TDOT will be able to determine right-of-way limits, edges of pavement, location of shoulders, as well as curb and gutter and sidewalk widths for those areas in which it is proposed. Until the final design plans are prepared, it is not possible to know specifically how a particular property and property owner will be impacted by the project.

For more information on the development of the proposed Pellissippi Parkway Extension, visit the Timeline section for this project.