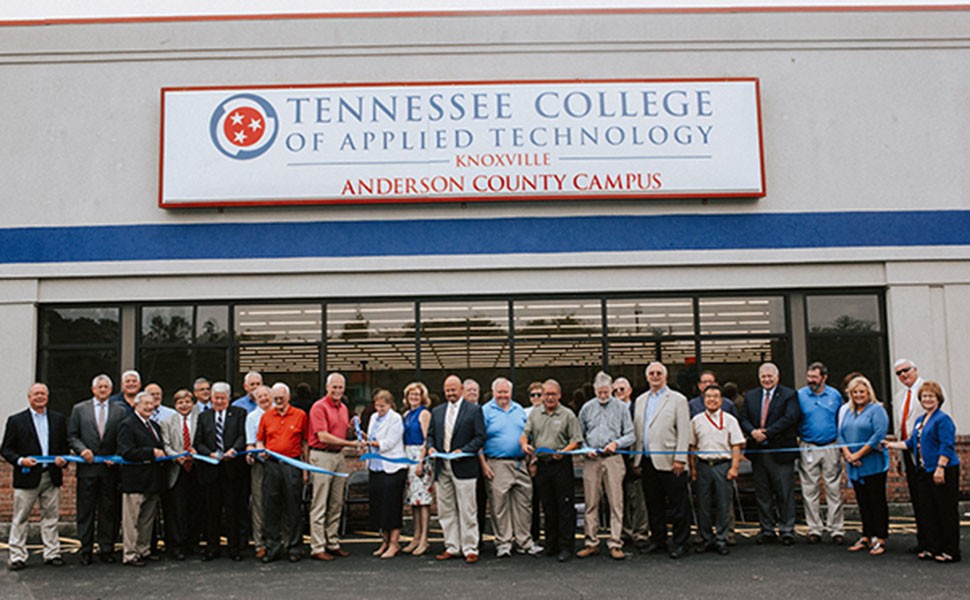 Anderson County is located in the heart of East Tennessee along I-75 that provides a direct connection to nearby Knoxville. The county delivers small town life amid forested hills, sparkling lakes and clean rivers. The municipalities of Clinton, Norris, Oak Ridge, Oliver Springs, and Rocky Top reflect a diverse county strongly influenced by its heritage and history but deeply committed to the future.

In 2012, Anderson County Schools received a $1.2 million Gaining Early Awareness for Undergraduate Programs (GEAR UP!) grant. The focus of the program was to change the view of and increase the number of students pursuing post-secondary education in the graduating classes of 2018 and 2019. A partnership developed between the Anderson County and Clinton City School Systems, the Anderson County Chamber of Commerce, and the Anderson County Education Foundation that made the project successful and positioned the community for future collaboration. GEAR UP! provided a broad array of services to students and educators including visits to industries and post-secondary education campuses, along with tutoring, career counseling, advising and financial aid assistance. In each year of the grant period, leaders reported steady increases in college enrollment including many first-generation college students. In addition to these matriculation increases, there was high demand for two-year degrees and technical training programs.

In 2013, local industry leaders stressed their growing needs for a high-skilled, trained workforce. At that time, Anderson County was served by the TCAT-Knoxville campus and local high school Career and Technical Education (CTE) programs. Anderson County Board of Education and Chamber of Commerce leaders began work to gather information on the county’s needs for additional technical training programs in response to the employer demand.

Then in 2014, the Anderson County Career & Technical Center began to house TCAT-Knoxville evening classes in welding and cosmetology to alleviate overcrowding at the TCAT-Knoxville campus. Anderson County Chamber of Commerce and Anderson County Economic Development Association leaders provided coordination with local industry as to the type of training needed and offered continual support for the local training facility with local and state officials. The economic development partners also coordinated tours of local industry for students and counselors to increase awareness of positions available in advanced manufacturing as part of the TCAT and GEAR UP! programming.

When the Tennessee Promise initiative began in 2015, the state saw first time freshmen enrollment in the state’s colleges and universities rise by 10%, including a 25% increase at Tennessee's technical schools. After the Governor's Drive to 55 Initiative was announced, the TCAT-Knoxville Campus had a back-log of applications with the bulk of those applications from Anderson, Campbell, Grainger, Knox, Morgan, Roane, Scott and Union counties. This demand within a 50-mile radius of Anderson County confirmed the need to create more local access to TCAT programs.

Anderson County leaders expanded their coalition in 2016 with the vision to create a temporary campus to bring a wider range of TCAT programs to the community. Renovation of an existing large commercial building to house the initial programs for the Anderson County campus allowed the community to move the project along rapidly. State approval was obtained, and the local owners granted use of the 27,000-square foot former grocery store rent-free for 2 ½ years. Norris city leaders supported the redevelopment with zoning changes and approvals. The county commission provided a lead grant of $250,000 that was matched with $60,000 in private funding from Aisin Automotive Casting Tennessee, Inc. and Magna-Eagle Bend Manufacturing, Inc. to renovate the temporary facility. In 2016, TCAT-Knoxville received a $500,000 Labor Education Alignment Program (LEAP) Grant from the Tennessee Higher Education Commission (THEC) to purchase training equipment for the planned programs.

In the fall of 2017, the Anderson County campus became a reality with a ribbon cutting for the temporary facility. In January of 2018, classes including welding, injection molding, and industrial maintenance as well as other classes for up to 350 students began. Initial enrollment reports reflected students attending from Anderson, Campbell, Grainger, Knox, Morgan, Roane, Scott and Union counties who now had access to Advanced Manufacturing training programs with immediate employment opportunities available upon completion of their training.

This project required the innovative thinking of an entire county and coordination of efforts by the local community, educators, industry and officials along with state officials who saw the project through to the ribbon cutting and classes beginning. Collaboration was the key to development of the temporary campus and future permanent campus. Notable partners and contributions included

In 2017, the State authorized the community to begin pre-design plans to build a permanent campus. A $5.7 million Drive to 55 Capacity Fund Grant through THEC was awarded to TCAT-Knoxville for the construction. A donation of 8.8 acres by SL Tennessee, LLC in the I-75 Industrial Park that had been given to the company by the city of Clinton made for a strategic location. Construction completion for the permanent facility is targeted for the fall of 2020. Groundbreaking and the Tennessee Board of Regents Chancellors Award for Philanthropy occurred in December 2018. The grant amount for the permanent facility was also increased to $13.7 million which included $1 million for training equipment. The new facility’s size also increased to 44,000 square feet and will also house Roane State Community College. The facility will be named The Anderson County Higher Education Training Facility.

Anderson County TCAT programs are preparing students with the skills they need for 21st century jobs and bringing new jobs to the region as businesses are looking for a skilled workforce. Adults and recent graduates from area schools are now able to enroll in classes locally instead of being placed on a waiting list at the Knoxville facility. Graduates will have access to immediate employment at local industries upon receiving their certification. Local industries continue to expand and now have access to a flow of skilled workers who support the local economy through retail and housing. First year project results include:

The Tennessee Higher Education Commission (THEC) Drive to 55 Project Capacity Fund Grant program was created as a result of the success of the Governor’s Drive to 55 initiative, institutions experienced a need to enhance program and infrastructure capacity in order to meet an increased demand for postsecondary credentials and workforce training. To help institutions increase capacity, the Tennessee Higher Education Commission awarded $24.25 million through a competitive grant process.