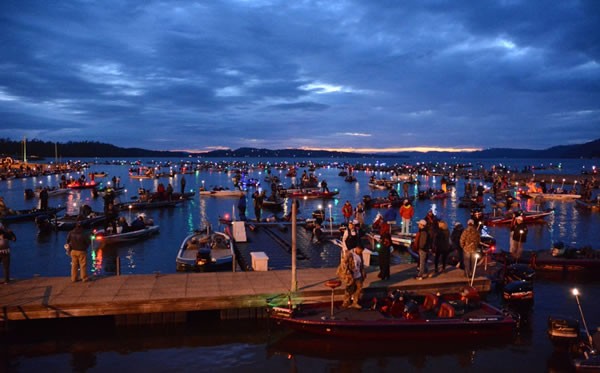 The City of Dayton and Rhea County are located in Southeast Tennessee on Chickamauga Lake. This reservoir, created in 1940, stretches more than 59 miles in length from its dam in Chattanooga to Watts Bar Dam in Spring City and offers abundant fishing and water sports assets. In 2000, the Tennessee Wildlife Resource Agency (TWRA) stocked Chickamauga Lake with Florida largemouth bass as a test case to build on the lake’s habitat assets. By 2011, bass anglers began reporting astounding catches weighing in five bass over 30 pounds. At that time, Rhea County was a Distressed County and Dayton leaders saw an opportunity to create a new bass fishing marketing program and construct new tournament amenities to leverage their lake assets.

In 2011, the Dayton City Council appointed experienced local leaders to explore strategies from other communities to boost tourism through the creation of a bass fishing destination. Dayton leaders knew that bass tournaments and lake tourism worked in other communities and that they could leverage their assets to create the best fishing destination in the U.S. with the right plan. So, Dayton leadership agreed to move forward with recruiting fishing tournaments.

In 2012, community leaders created the “FISH DAYTON” brand. That same year, Chickamauga made bass fishing news when five bass that nearly exceeded 45 pounds were weighed in at a tournament. This was an average of nearly 9 pounds per fish, and the news spread fast on the bass tournament circuit.

In 2013, Dayton hosted the Walmart Fishing League Worldwide (FLW) Tour on Chickamauga Lake as a trial run to prove that they could host professional events. The tournament winner caught a 4-day total of 103.3 pounds which was the second largest in FLW Tour history. This event was televised and the stage was set for the FISH DAYTON bass fishing destination strategy to fully develop. Since that time, FISH DAYTON branding, marketing and tournaments have put Rhea County, Dayton and Chickamauga Lake on the map as one of the premier largemouth bass fishing destinations in the country.

Dayton leaders knew that they also needed infrastructure to support anglers and tournaments. They began the process of developing a vision for their Dayton Boat Dock facility that was built in the 1950’s. They toured other successful communities and developed plans for their facility. In 2012, city leaders approved a $175,000 plan to upgrade the Dayton Boat Dock facility and worked with the Tennessee Valley Authority (TVA) to gain approval. With TWRA’s and TVA’s assistance, the largest boat ramp on Lake Chickamauga with the capacity to launch 8 boats simultaneously and new parking for over 400 vehicles was constructed. With these investments, Dayton became one of the few facilities in the nation that can accommodate large tournaments. Additional facility improvements are currently in process with the next phase to include harbor dredging with shoreline and ramp improvements scheduled to begin in the fall of 2018 through Appalachian Regional Commission (ARC) and TNECD Asset Enhancement Grant funding.

FISH DAYTON branding, tourism marketing, and infrastructure investments have positioned the community to capitalize on their lake access. In July 2018, Bassmaster ranked Chickamauga Lake No. 2 in the nation and No. 1 in the Southeast Region for the 100 best bass lakes in the country. New tournament revenues, lodging, restaurants and tournament suppliers have produced many new jobs and a dramatic increase in sales and occupancy tax revenues. Quality of life for residents has also been improved and Dayton’s unique sense of community has been sustained. Businesses in the Dayton Main Street district and the entire city have benefitted from the thousands of new customers that visit the community for tournaments and lake recreation.

FISH DAYTON has resulted in $15 million in new private investments and hundreds of construction jobs for the community. Since 2015, two new hotels and five restaurants have been constructed or upgraded to meet the lodging and dining needs of tournament anglers and lake visitors Dayton’s lodging tax collections have grown 34.5% since 2014 when FISH DAYTON began. Lodging tax revenues in 2017 were $227,407, a 19% increase over 2016. The new Blue Water Lodge and Sleep Inn that opened in early in 2017 contributed to this increase. This revenue source is projected to continue to increase again as a third new hotel is scheduled to break ground in August of 2018.

Dayton has seen the creation of more than 107 new full-time jobs linked to the new lodging and restaurants. Property tax collections are up more than $160,000 annually, and the city’s sales tax collections reflect that more than $33 million new gross sales dollars entered the local economy in 2017 compared to receipts in 2013. The new Blue Water Lodge that significantly added to the private investment totals and is providing new lakeside lodging and amenities that enhance Dayton’s lake tourism destination brand and amenities.  Project results from 2014 to 2016 include

The TNECD Asset-Based Planning program was developed through the Rural Task Force to assist distressed counties with strategic planning and development of short-term goals that would address the causes of distress: unemployment rate, per capita income, and poverty rate. In 2016, 23 counties participated in the program, and it was expanded to include 21 more at-risk counties in 2017. TNECD and the University of Tennessee Institute for Public Service worked with the communities to develop action-oriented goals based on the communities’ assets. Following that process, TNECD wanted to ensure that the communities had the resources to accomplish their goals and created the Asset Enhancement Grant provided through the Governor’s Rural Task Force and Tennessee Rural Economic Opportunity Act of 2016 and 2017.

The mission of the Appalachian Regional Commission is to innovate, partner, and invest to build community capacity and strengthen economic growth in Appalachia. Through ARC funding, TNECD is able to award grants each year for economic and community development projects including infrastructure development in the 52 counties in middle and east Tennessee served by the ARC.