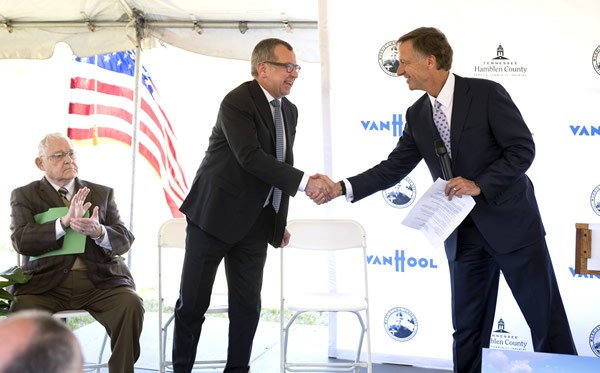 Hamblen County and the City of Morristown have a track record of attracting new industry. The success, more than 100 manufacturing operations in the county, has been a result of proactive economic development efforts and attributes of the community, including proximity to Knoxville and Johnson City, access along Interstate 81 and more favorable topography than much of the surrounding region.

The City of Morristown has taken a lead role in the development of industrial properties. In 1966, Morristown created the East Tennessee Valley Industrial District, the second municipal-owned industrial park in the State, which was quickly filled by the furniture industry and now serves automotive, plastics and the consumer goods industries. In the 1970’s, the city created the Airport Industrial Park that quickly filled up with automotive suppliers and other manufacturers. In the 1990’s, the City acquired 900 acres near I-81 which became the East Tennessee Progress Center (ETPC). The City completed initial roadway and utility improvements to the park in 2001, and since that time several large industries located on the property. Over the last 15 years, Morristown and the state have invested in utility and roadway infrastructure and grading to serve the park. .

In 2016, the county was selected to participate in the TNECD Select Tennessee Property Evaluation Program (PEP).  The PEP process focused on the ETPC and one additional site with rail access. Austin Consulting identified the Progress Center Howard Allen and Lot 27 sites to have the greatest near-term opportunity to attract greenfield industrial projects. They identified infrastructure and property acquisition actions that were needed to fully prepare the park properties.

The first recommendation reflected the business park’s significant wastewater capacity limitation. It was recommended that the community focus its immediate attention on the wastewater capacity constraints in order for Progress Park to realize its full potential, especially given the abundance of available water capacity. Morristown Utility System had completed feasibility planning for the upgrade of an existing industrial wastewater treatment plant located five miles away and had identified locations for collection line installations. Approval to upgrade the existing treatment plant to 500,000 gallons per day capacity was obtained from the Tennessee Department of Environment and Conservation (TDEC), and local funding was identified to complete the wastewater treatment and collection system updates to serve the business park in 2017.

The second recommendation reflected the need to acquire two small residential parcels located within the larger Howard Allen site to create one contiguous site of 120+ acres. City leaders had been in dialogue with local property owners and worked with them to acquire both properties in the spring of 2018 as prospects began to consider the location.

Morristown Chamber of Commerce leaders obtained technical assistance and funding through TNECD and TVA to complete additional improvements to make Progress Park attractive to prospects. In 2017, TNECD Site Development and TVA InvestPrep grants were awarded to construct a new access road for the Howard Allen site that would also provide future access to nearby properties. In the spring of 2018, TNECD Select Tennessee Site Certification was awarded to the Howard Allen site of East Tennessee Progress Center.

ETPC site improvements positioned the Chamber to increase marketing efforts, and the property received multiple visits in 2017 as improvements were underway. In keeping with their proactive approaches to economic development, Morristown Chamber of Commerce leaders secured TVA Valley Sustainable Community designation that gave the community an added advantage based on their commitment to integrate economic development into local sustainability efforts. The Chamber also provided virtual building design services to prospects so that they could visualize how their facility would fit and function on available properties.  Morristown Chamber staff work closely with Northeast Tennessee Valley Regional Industrial Development Association (NETVRIDA) to cooperatively market to European Union (EU) countries including the United Kingdom, Germany, Italy, Belgium and others. Regular contact with EU economic development officials and visits to these countries provide recognition of the region, prospect contacts and skills in working with foreign companies and investors.

In April of 2018, Governor Bill Haslam, TNECD Commissioner Bob Rolfe, and Hamblen County and Morristown government and economic development officials joined Van Hool officials to announce that the family-owned Belgian manufacturer of buses, coaches and industrial vehicles would establish its first US manufacturing plant in Morristown. The project will bring investments of $47 million to construct a 500,000 square foot facility and create more than 600 jobs on the Howard Allen site at the East Tennessee Progress Center beginning in 2020. The announcement has created a tremendous increase in interest from suppliers and investors and direct and additional indirect jobs are expected to be created in Hamblen County and throughout the region.

For project contact and more information visit the Morristown Area Chamber of Commerce.

Manufacturing is one of the most significant economic drivers in Tennessee. The Select Tennessee  program assists communities in preparing sites for investment and job creation offering reduced risk and shortened timelines for development. Through the Site Certification Program, the Property Evaluation Program (PEP) and the Site Development Grant program, communities have several opportunities to receive feedback on their sites and funding for site improvements. TNECD Select Tennessee program services are provided through the Governor’s Rural Task Force and Tennessee Rural Economic Opportunity Act of 2016 and 2017.