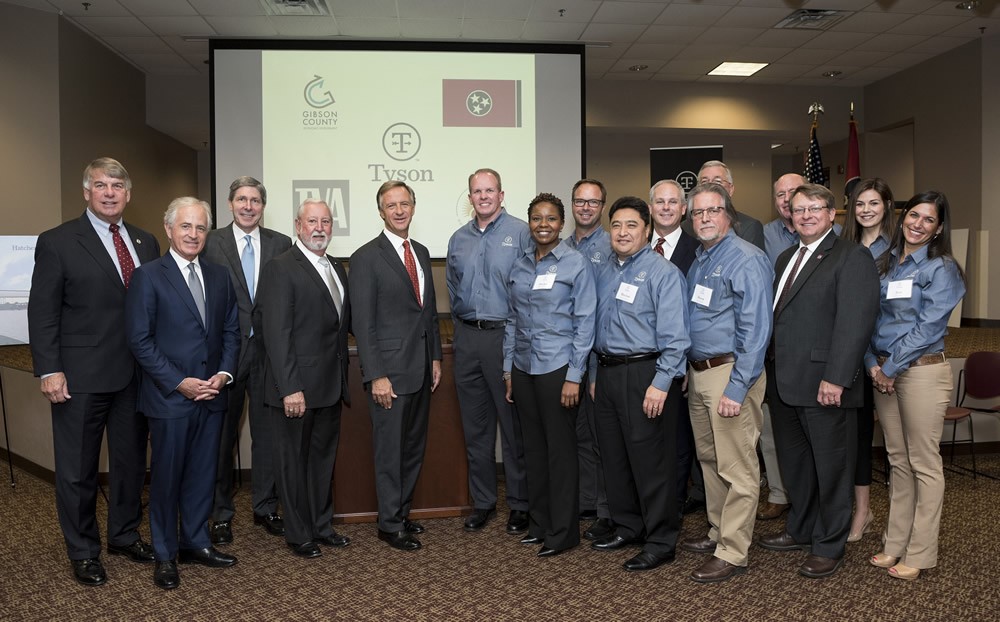 For 20 years, the site had been shown to numerous industrial prospects. Several prominent prospects shortlisted the site, but it was clear that improvements were needed. The land had unique characteristics, including a deep creek that separated the property into south and north parcels. It was difficult for prospects viewing the property to get a good visual because neither parcel had a good access road. Other needs included water, sewer, electric and gas utilities that were located 2,000 feet away, which would require costly extensions. When the opportunity arose, Gibson County government and economic development leaders took action to obtain technical assistance and funding through TNECD, TVA and local industrial development programs to invest in necessary improvements to make the site attractive to business prospects.

During the same time period, TVA created the InvestPrep site development program. TVA’s program is designed to bring to market new and improved industrial sites and buildings within the TVA territory and position communities to compete successfully for new jobs and investment. In 2015, Humboldt and Gibson County were awarded an InvestPrep grant and provided matching funds to construct a new road entrance, signage and landscaping for the South Site.

In 2015, the TNECD launched the Site Development Grant Program. Gibson County and Humboldt submitted grant requests for site development for both the South and North Sites. TNECD awarded funding for projects that were completed in October of 2017. Gibson County and Humboldt provided matching funds. The South Site grant funded the relocation of .75 miles of 69kV utility lines located across the middle of the property to the northern boundary and added 1.2 miles of new lines adjacent to the South Site road entrance. The North Site grant funded water line extensions to the site, including a 3,200-foot water main from the SR 79 Bypass to the South Site.

All of the site improvement investments resulted in increased interest from potential companies. The Gibson County Industrial Park received seven visits in 2017, a 50 percent increase from the previous year. In May of 2017, Gibson County and Jackson Chamber of Commerce economic development officials began working with a site selection consultant on a new Tyson Foods facility that would create 1,500 jobs with $300 million in capital investment.

Over the summer, Gibson County Economic Development leaders worked with Tyson Foods to host a site visit and determine the feasibility of providing needed utilities. A strong relationship was formed with the company through this process. In August, the Gibson County team received news the company had chosen a site in Kansas as its preferred location for its next plant.

Soon after these events, the Kansas community decided it did not want the facility and retracted its incentive offer. Company officials immediately contacted Gibson County and asked if the community would still be interested in the company locating at the Gibson County Industrial Park. The Gibson County team met with Tyson Foods officials at the company headquarters in Springdale, Arkansas and toured their facilities.

Over the next month, the Gibson County team met with citizens, farmers, and community leaders to gauge interest in the project, as well as any potential opposition. The project was discussed with over 200 individuals. The consensus was that most everyone viewed the Tyson Foods project favorably. Community leaders decided to capitalize on the opportunity. Tyson Foods’ investment promised to provide new jobs and improve West Tennessee’s regional manufacturing and agricultural industries.

In November of 2017, Gibson County officials and Tyson leaders held an announcement celebration with over 250 attendees including Gov. Bill Haslam, U.S. Sen. Bob Corker, TNECD Commissioner Bob Rolfe and key local economic development partners. The announcement has created a tremendous increase in interest from outside developers and investors as thousands of new direct and additional indirect jobs are expected to be created throughout the region.

Tyson Foods investments in Gibson County and adjacent communities will increase the number of food sector jobs and support agricultural enterprises across West Tennessee. The direct investment from Tyson at the start of production is projected to be $300 million. Initial direct investment and employment projections include:

Manufacturing is one of the most significant economic drivers in Tennessee. The Select Tennessee Site Certification program assists communities in preparing sites for investment and job creation offering reduced risk and shortened timelines for development. Through the certification program, the Property Evaluation Program (PEP) and the Site Development Grant program, communities have several opportunities to receive feedback on their sites and funding for site improvements. TNECD Select Tennessee program services are provided through the Governor’s Rural Task Force and Tennessee Rural Economic Opportunity Act of 2016 and 2017.