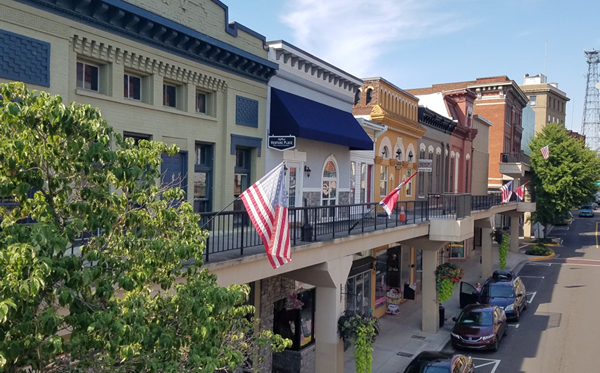 Morristown, located just off I-81 halfway between Bristol and Knoxville in Hamblen County, offers a thriving historic Main Street district with unique architecture, shopping, dining, living and events. Near two lakes and the mountains, Morristown is a vibrant, scenic, diverse, entrepreneurial and fun place to live. Morristown also has collaborative community leadership and a strong track record of progressive partnerships that support economic and community development initiatives.

The Crossroads Downtown Partnership operates as the city’s Main Street organization with the mission to utilize the heritage and historic resources of downtown Morristown to stimulate economic development. Because Morristown has the best of both rural and urban environments, the CDP’s vision is to make Morristown the “go to” city between Bristol and Knoxville. Since 2009, the City of Morristown and CDP have thoughtfully preserved the downtown commercial district, which is known for its outdoor skywalks on the second floor of the buildings. This commercial district provides an ideal location for new and expanding downtown businesses.

CDP began as a program within city government, but became a stand-along organization with 501(c)(3) nonprofit status in 2013. In 2016, CDP and the City of Morristown worked together to gain designation of their downtown commercial core as a National Register Historic District with emphasis on the upper stories known as the SkyMart.

CDP works with the city to implement a façade grant program that uses part of the city’s Community Development Block Grant funding to provide matching grants to building owners and tenants for façade refurbishment that meets National Register standards. This program also covers roof repairs that have helped preserve many buildings. Through their partnership, Morristown leaders have conserved the downtown’s historic buildings.

In 2016, CDP was awarded a $50,000 TNECD Main Street Entrepreneur Grant to establish the SkyMart Venture Place, an entrepreneur center and co-working space. Led by CDP Executive staff and Economic Vitality Committee members in partnership with key organizations like Co.Starters, the Knoxville Entrepreneur Center Walters State Community College and the Greater Knoxville SCORE, SkyMartVP opened in February of 2017. Since opening, SkyMartVP has spurred new business growth and an entrepreneurial ecosystem in downtown Morristown.

CDP leaders have also partnered with economic development leaders to integrate SkyMartVP entrepreneur services into local economic development efforts and Morristown Utility Systems FiberNET staff to market its gigabit services. CDP worked with a downtown property owner who provided a charitable donation for a portion of the rent to bring an upper story business space back into service after five years of vacancy.

To jumpstart center activities, business owners and entrepreneurs throughout the region were invited to apply for Co.Starters business startup training and ETSY classes offered through the Knoxville Entrepreneur Center. In both courses, attendees learned to identify prospective customers and engage them in understanding the potential of their business strategies. Business development fundamentals were also taught as a portion of each course, and Co.Starters graduates obtained Walters State Community College credit. Business pitch competitions and referrals to business financing followed completion of training sessions. Short courses on web-based entrepreneurship and branding with social media marketing and workshops on Wi-Fi, water management systems and 3D Virtual Reality experiences were also offered during the first year of the project.

Several new businesses have been launched or expanded as a result of the comprehensive services provided through the project. Today, SkyMartVP offers entrepreneurs a place to learn how to start and run their business, workspace to operate, and a setting to share ideas. The center is the place in downtown Morristown to interact with a variety of people, learn about entrepreneurship and business, relax and drink coffee, and network.

The goals of the project to lease a vacant space, award a $3,000 grant to the building owner to renovate it as an entrepreneur center and provide Co.Starters training to at least 10 participants have been accomplished. Future plans include expanding SkyMartVP operations to meet the growing demand for entrepreneur and small business services and to work with SCORE to provide a series of workshops for non-profit businesses designed to increase the community’s small business support network. First year project results include

Downtown revitalization is a critical component of successful rural economic and community development. The Tennessee Department of Economic and Community Development encourages entrepreneurship development and adaptive reuse of commercial buildings in downtown business districts with the Main Street Entrepreneur Grant program that funds activities that put vacant and/or underutilized buildings into productive service and serve as economic drivers for downtowns and to develop entrepreneurs. The Tennessee Main Street and Main Street Entrepreneur Grant programs work together to help communities revitalize their downtown districts and create new businesses through the Governor’s Rural Task Force and Tennessee Rural Economic Opportunity Act of 2016 and 2017.

Video can be found at https://youtu.be/ROAFK6auqD0