NASHVILLE - December 12, 2003 - On today´s 20th anniversary of the Tennessee Government Executive Institute (TGEI), Department of Human Resources Commissioner Randy Camp announced a new effort to assure the state that its employees are prepared for management and leadership roles.

"This program sets the standard by which all executive training programs are measured," Camp said. "More than fifty percent of executive-level state employees are now eligible for some type of retirement; we must have prepared managers and leaders for the immediate and long-term future."

TGI, a partnership between the Tennessee Department of Human Resources and the University of Tennessee, consists of three one-week sessions within a three-month period offering the state´s senior executives the opportunity to broaden their knowledge and perspectives of leadership principles and practices. The participants study, analyze and discuss the major changes - local through global - that are rapidly occurring in the business, government and overall workplace environment. They determine the implications these changes will have on their ability to efficiently manage resources and organizational systems.

Economic concerns have put a question mark over the future of TGEI, but officials see the endowment as the opportunity to continue the program and increase participation.

"As a private business owner, I have a stake in seeing to it that state employees have good management and leadership skills, "said Dennis Henderson, president of TLM Associates of Jackson, Tenn., who collected donations from his colleagues in West Tennessee. "State employees set the standard not only for leadership and progressive thinking but also for ethics and values."

In addition, the "TGEI Class of 2003" challenged their peers in previous classes to support the Endowment, by giving $2,003 to the effort.

"What I learned at TGI prepared me to be a leader in my department, teaching me to constructively motivate my staff and challenging me to think in new ways to solve problems," said Joe Swinford, president of the Class of 2003. For more information about TGEI, visit the Department of Human Resources' Web site at: http://www.tn.gov/dohr/. Contact: Lola Potter (615) 532-8560 Tenn. 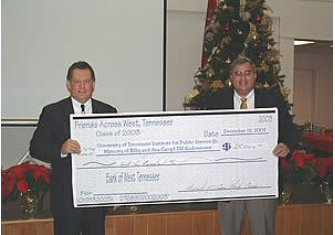 Dept. of Human Resources Commissioner Randy Camp of Alamo accepts a check for $25,000 from Dennis Henderson, President of TLM Associates of Jackson, Tenn. The money is contributed to an endowment for the Tennessee Government Institute, a partnership program with the University of Tennessee.