Roadcut Section A1 is arguably the most spectacular of all the roadcuts.  It is presented as a three-part triptych: Section A1 Northwestern Part, Section A1 Middle Part, and Section A1 Southeastern Part.  A multi-storey, submarine channel-fill of light-colored, crinoidal grainstone sweeps downsection from southeast to northwest incising some 14-meters into the underlying siliciclastic mudstone.  This major grainstone body has been divided into 16 major bedsets all of which are characterized by planar laminations.  These bedsets describe 4 distinct channel-fills or storeys, which are from oldest to youngest: bedset 1-5, bedset 6 (?), bedsets 7-9, bedsets 10-13, and bedsets 14-16.  The geometry defining bedset 6 does not permit a unique stratigraphic position interpretation; it may well be in the category of bedsets A (Southeastern Part) and bedsets B (Northwestern Part) which are considered to be older than and separate from the previously described major grainstone body.  This interpreted relationship and the observation that the oldest bedsets group of the major grainstone body (bedsets 1-5) does not occur at the base of the 14-meter deep channel, suggests that grainstone deposition did not necessarily immediately follow channel incision, but probably occurred episodically in both space and time.

The major grainstone body records lateral as well as vertical accretion.  Section A1 Middle Detail1 depicts a southeast to northwest facies change in bedset 3 from coarser to finer grainstone and then to siliciclastic mudstone containing dispersed crinoid clasts, mostly columnals.  This indicates a down-bedding (and also probably a cross-channel) energy gradient that results in the simultaneous deposition of materials having markedly different grain sizes, a characteristic of sediment gravity flows. 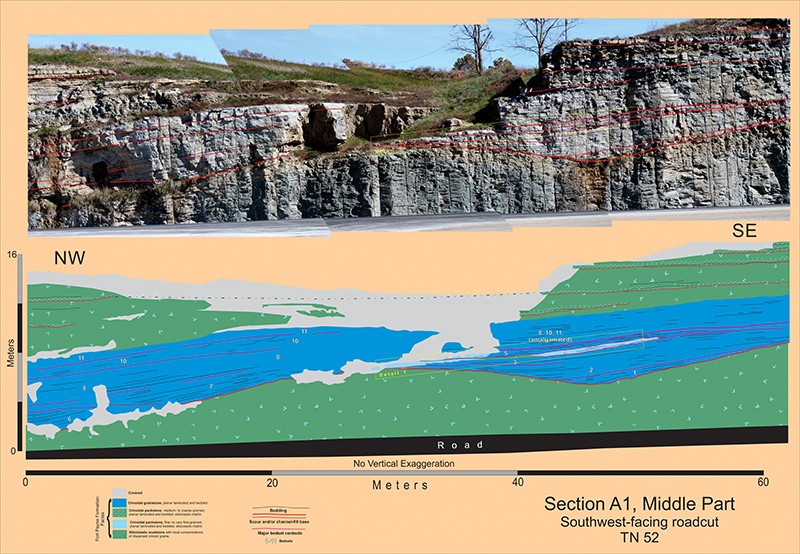 In the lower left corner of Section A1 Northwestern Part the bedding of bedset 10 downlaps onto grainstone unit B, an indication of a haitus or minor disconformity.  The bedding of the underlying siliciclastic mudstone is essentially parallel to the immediately overlying grainstone unit B.  However, down section and further to the right the bedding in the siliciclastic mudstone is essentially horizontal and the dashed red line indicates that a very poorly exposed erosion surface separates these mudstones with very different bedding orientations.  This geometry suggests the presence of a lower submarine channel which has been filled with both crinoidal/bryzoan grainstone (unit B) and siliciclastic mudstone.  The relationship between this erosion surface and the erosion surfaces bounding the nearby grainstone unit defined by bedsets 7-9 is unclear. 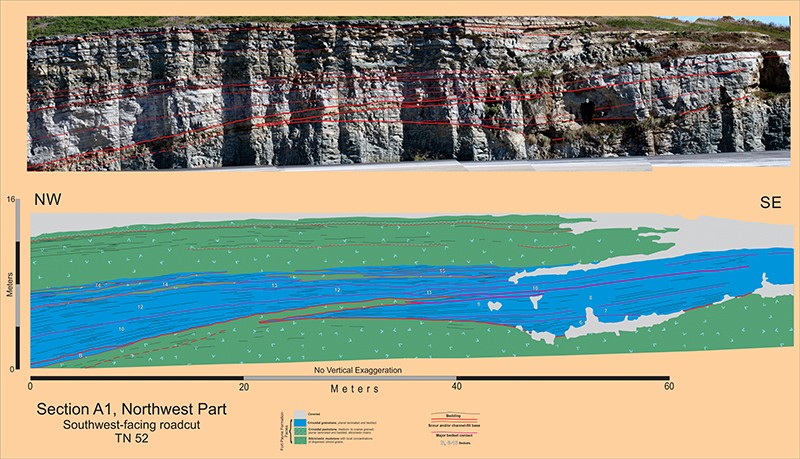 In the oblique image shown in Section A1 Northwest Part-NW Detail (oblique view) the inclined bedding of the siliciclastic channel-fill appears to be truncated by the disconformity at the base of the unit defined by bedsets 7-9.  This is not apparent in the images of Section A1 Northwestern Part because the critical area is in deep shadow and the strata surfaces are very poorly shown.  However, in the oblique image, even though it is in bright sunlight, the mudstones in the region immediately to the left have sufficiently weathered so as to largely obliterate strata surfaces, unfortunately, this is where the the two disconformities that bound bedsets 7-9 must extend so as to confirm their geometric relationships with the underlying mudstone channel-fill. 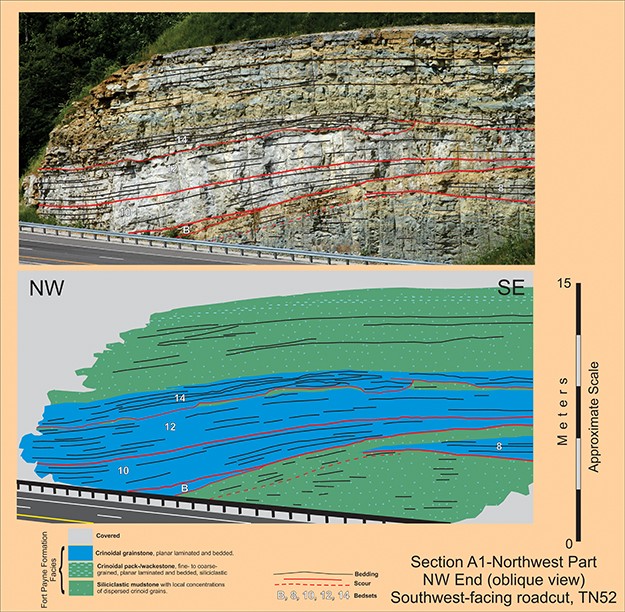 Bedset 17 shown in Section A1 Southeastern Part is comprised of essentially horizontal, planar sheets of crinoidal/bryzoan packstone with a siliciclastic mud matrix.  The individual bed marked with the white star can be traced into adjacent roadcuts for 2.5 kilometers.  These sheet-like deposits are interpreted to represent the deposition of unconfined sediment gravity flows, perhaps on the more distal portions of a submarine fan. 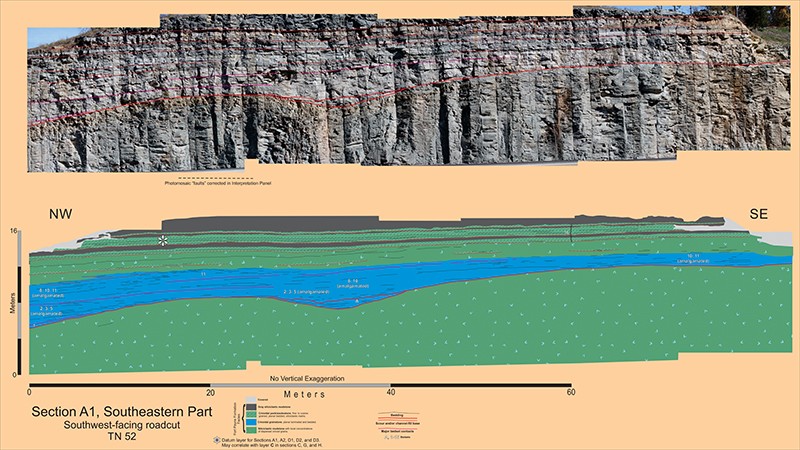