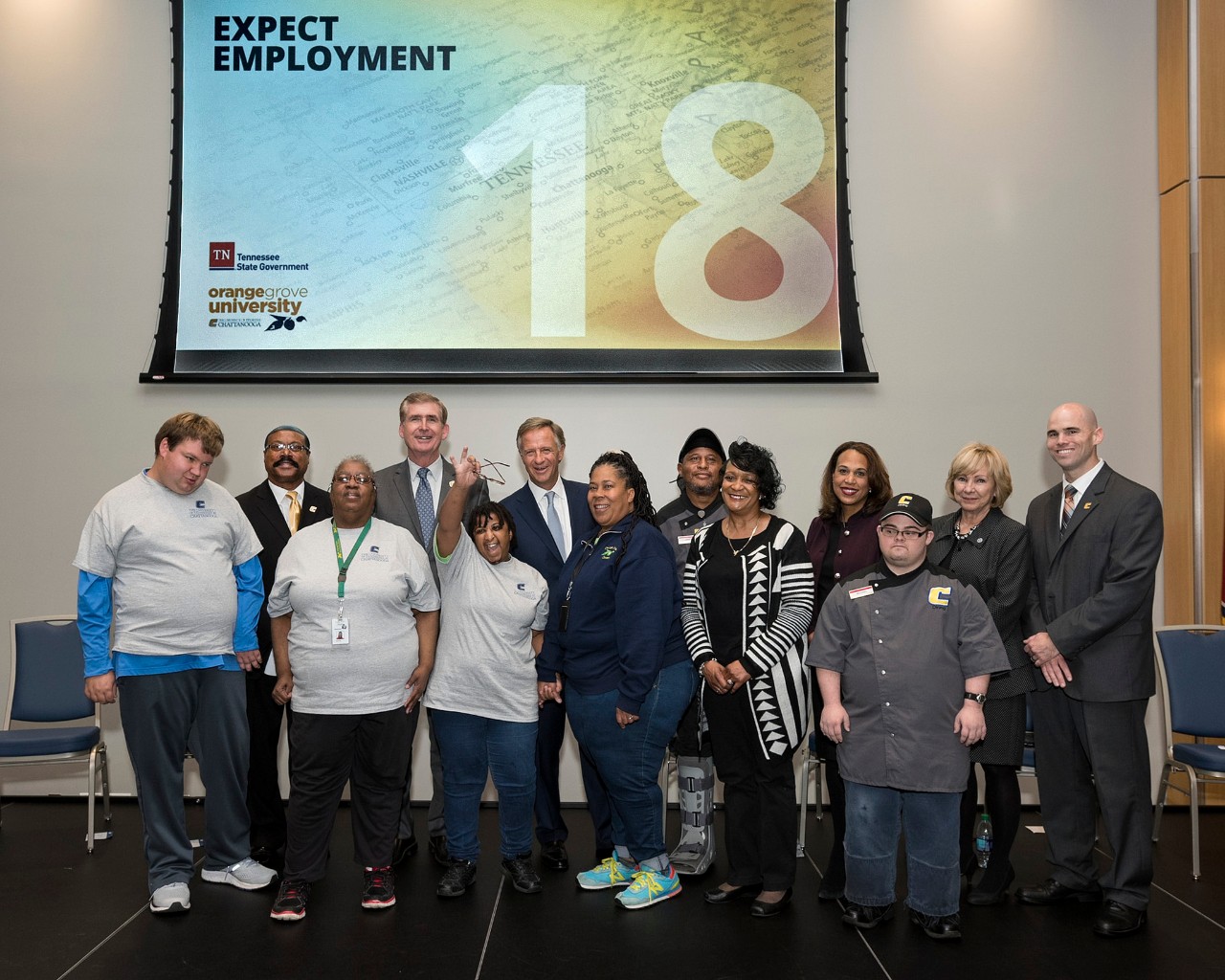 CHATTANOOGA—An improving employment rate for people with intellectual and developmental disabilities, increased partnerships with employers, and the expansion of state government internships for people with disabilities are some of the highlights in this year’s Expect Employment Report.

The report was presented to Gov. Bill Haslam on Thursday at the University of Tennessee-Chattanooga, where several people with intellectual and developmental disabilities both work and volunteer on campus, with support from the Orange Grove Center. The governor toured the work site and met with some of the employees and volunteers before receiving the report.

“The work of the Employment First Task Force has led to tangible results for many people with disabilities,” Department of Intellectual and Developmental Disabilities (DIDD) Commissioner Debra K.Payne said. “We know that more people with disabilities want to contribute to the workforce,and through the continued efforts of both state agencies and private partners to engage employersand prepare students for future employment, I believe no state is better positioned than Tennesseeto lead the way.”

Created in 2013 through Executive Order No. 28, the Employment First Task Force is charged with eliminating barriers, streamlining services and increasing integrated and competitive employment for people with intellectual and developmental disabilities, mental illness, substance abuse disorders and other disabilities.

“I believe the partnerships we’ve created with this task force are essential to creating meaningful employment opportunities.” said Tennessee Department of Human Services Commissioner Danielle W. Barnes. “Combining our efforts and sharing resources not only helps us reach our common goal of increasing employment outcomes for individuals with disabilities it helps us build a thriving Tennessee.”

This year’s Expect Employment report focuses on the results of five years of collaboration among state agencies and partner groups. Some of the highlights include:

The task force, which is co-chaired by DIDD and the Department of Human Services, meets quarterly. Representatives from the Departments of Mental Health and Substance Abuse Services, Labor and Workforce Development, Education, Economic and Community Development, and Health as well as the Division of TennCare, the Tennessee Council on Developmental Disabilities, Vanderbilt Kennedy Center and several disability advocacy groups are also members of the task force.

Read the full report at: https://www.tn.gov/content/dam/tn/didd/documents/consumers/employment-first/task-force/reports/2018_Expect_Employment_Report.pdf

About the Department of Intellectual and Developmental Disabilities

The Department of Intellectual and Developmental Disabilities is the state agency responsible for administration and oversight of community-based services for approximately 8,000 people with intellectual disabilities as well as 4,000 people through the Family Support Program. Every day, the department strives to support people to live rewarding and fulfilling lives. It does so by ensuring people are free to exercise rights, engage with their broader communities and experience optimal health. DIDD is the first state service delivery system in the nation to receive Person-Centered Excellence Accreditation from the Council on Quality and Leadership. It has also been recognized as a national leader in its efforts to increase competitive, community-based employment outcomes for people with disabilities.