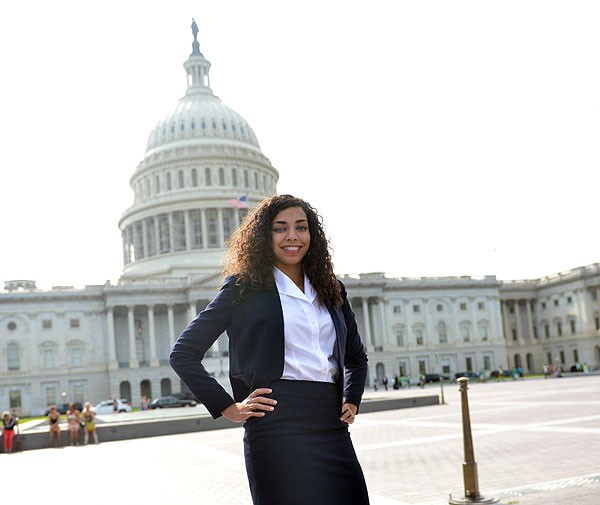 Darrah Hall is a true example of what determination, courage and perseverance looks like. Darrah exited DCS custody at age 15 to Subsidized Permanent Guardianship with her aunt. Darrah was connected with the Office of Independent Living to access the Bright Futures Scholarship funds from DCS.

In May 2014, Darrah earned her Bachelor’s Degree from the University of Memphis with a double major in Anthropology & African and African American Studies.

In 2012, Darrah Hall was selected to participate in a National Youth in Transition Data Conference and represent the State of Tennessee. During this visit, she felt that she belonged in Washington D. C. but was not sure how she would get back there.

Darrah also worked as a Peer Advocate and did contract work with the Court Improvement Program. According to Darrah:

“My experience as a peer advocate for aging-out foster youth in Memphis revealed to me firsthand the powerlessness youth feel and the reasons they refuse to accept extension of foster care services,” Darrah said. “The benefits of extended care include transitional living services and financial aid assistance for school and living expenses and these services are critical for aging-out foster youth who are often more vulnerable to negative outcomes.”

In March 2014, as a Youth Villages Scholar Darrah was selected by Youth Villages Transitional Living to participate in the “In Performance at the White House” workshop hosted by First Lady Michelle Obama. In the Summer of 2014, Darrah participated in the Foster Youth Internship at Congressional Coalition. Darrah worked directly with the Senate Finance Committee under the direction of Domestic Policy Advisor Laura Bernsten, her primary job functions were policy reform related to child welfare and education.

During this internship, Darrah requested a conference with Jocelyn Moore the Deputy Chief of Staff for the Senate Finance Committee. Darrah was intrigued by Ms. Moore’s work ethic. During their conference Darrah spoke of her dreams, aspirations, and how she felt being at this crossroad in her life. Darrah was assured that things would work out and it would be possible for her to stay in the Washington D.C. area. As a result of that conference, Darrah was selected by Moore to attend the Senate Hearings.

At the end of her internship, Darrah gave specific recommendations to Congress “To amend the Court Improvement Program to include foster youth age 14 or older in the specialized trainings that are available for judges, attorneys, and other legal personnel. These trainings will help to create more empowered, engaged, confident youth who will be able to work with child welfare professionals in a collaborative way this will ultimately increase youth acceptance of extended foster care.”

Moore took Darrah under her wings as a professional mentor and has offered Darrah housing accommodations so she could pursue working on Capitol Hill. This solidified Darrah’s decision to transition from Tennessee to Washington D. C.

In interviewing Darrah, she recently expressed: “A person should live their life for a selfless purpose to give back to those who are less fortunate. Generosity can take you places that you have never imagined.”

She wants youth in Tennessee to remember to “stay driven and stay focused.”