PUBLIC NOTICE: A Finding of No Significant Impact (FONSI) environmental document for the proposed State Route 374, from SR 149 at River Road to SR 76 / US 79 (Dover Road) near Clarksville, Montgomery County, Tennessee, was approved by the Federal Highway Administration on July 6, 2020, and is available for public inspection. All related documents can be downloaded and viewed from the Library section of the project website. Copies are also available at the following location.

The proposed project for State Route 374, west of Clarksville in Montgomery County, consists of a new transportation corridor that would extend the existing route for approximately 7.2 miles. The new roadway would extend from SR 149, west of River Road, north to US 79/SR 76/Dover Road at the existing SR 374/Paul B. Huff Memorial Parkway interchange. (see Project Location Map)

Improvements are also proposed for SR 149, from River Road to west of Cumberland Heights Road, for approximately one mile.

The City of Clarksville and Montgomery County are currently undergoing rapid development, due in part to the area’s largest employer, Fort Campbell Military Reservation. Existing access to the military reservation from developing areas south and west of Clarksville requires traffic, including heavy truck traffic, to travel through downtown Clarksville to cross the Cumberland River. With the exception of local crossroads, no north-south US or state highway currently exists between US 79/SR 76/Dover Road and SR 149, west of Clarksville.

With current and projected development, area traffic needs are expected to continue to increase. The purpose of the proposed project is to enhance connectivity and improve mobility in and around the Clarksville area.

The proposed project would provide an improved transportation corridor between areas to the south and west of the City of Clarksville. The newly constructed facility would divert traffic away from congested roadways leading to and from downtown Clarksville, improving access to Fort Campbell Military Reservation and other major employers, as well as residential areas south and west of downtown.

The proposed extension of SR 374 would be a partially access-controlled facility, constructed primarily on new location. The new facility would include two 12-foot travel lanes in each direction, a 48-foot median, 12-foot outside shoulders, and 6-foot inside shoulders. Bridges would be constructed over the R.J. Corman Railroad and the Cumberland River. A new signalized intersection would be constructed where the new roadway intersects with SR 149. The proposed right-of-way ranges between 200 and 350 feet.

The proposed project would also include widening SR 149 from two to four lanes with a 12-foot center turn lane and 12-foot paved shoulders, from River Road to west of Cumberland Heights Road. On the east end, the project would tie into the current widening of SR 149 between River Road and SR 13 (Cumberland Drive).

Due to the significant cost estimate to appraise and acquire Right of Way within the project limits, the proposed improvements will be separated into two smaller sections or phases. 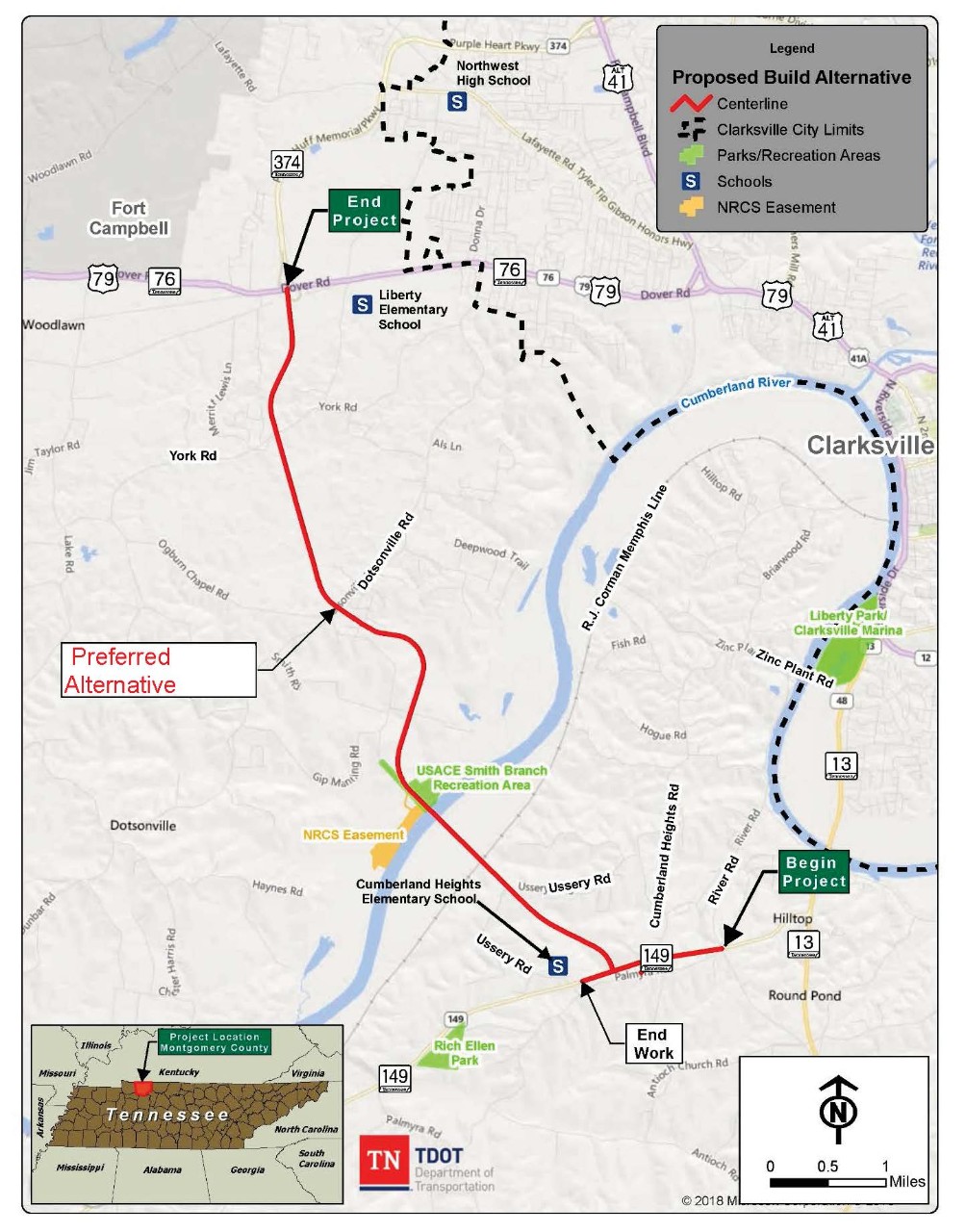