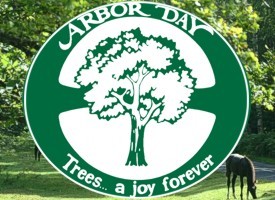 In Tennessee, Arbor Day is officially celebrated on the first Friday in March. The state ceremony is hosted by the community whose Tree Board or advisory committee received the Tree Board of the Year recognition by the Tennessee Urban Forestry Council the previous year. In addition, numerous local communities and schools hold Arbor Day and Tree City USA recognition ceremonies throughout March and April.

J. Sterling Morton, a newspaper journalist, is honored as the father of Arbor Day.  He and his wife Caroline were nature lovers, and shortly after they moved to the barren plains of Nebraska they began planting trees.  Sterling wrote articles encouraging local organizations to help him.

Morton's vision grew with passing years.  In 1872, he spoke at the Nebraska State Board of Agriculture meeting, proposing a statewide tree planting holiday for the month of April. The first Arbor Day in Nebraska was a huge success, with over a million trees planted.  Three years later Sterling Morton was honored when his birthday, April 22, was selected as the official date for Arbor Day.

The Arbor Day idea spread to other states.  In 1875, Tennessee became one of the first states to adopt this special day.  In 1925, the Tennessee legislature set "Bird, Flower and Arbor Day" on the first Friday in April.  In 1946 it was changed to the first Friday in March.  This law calls for educators, civic societies and government officials to create "a better understanding of nature and the importance of protecting wildlife, planting and cultivating flowers, and setting and protecting trees."