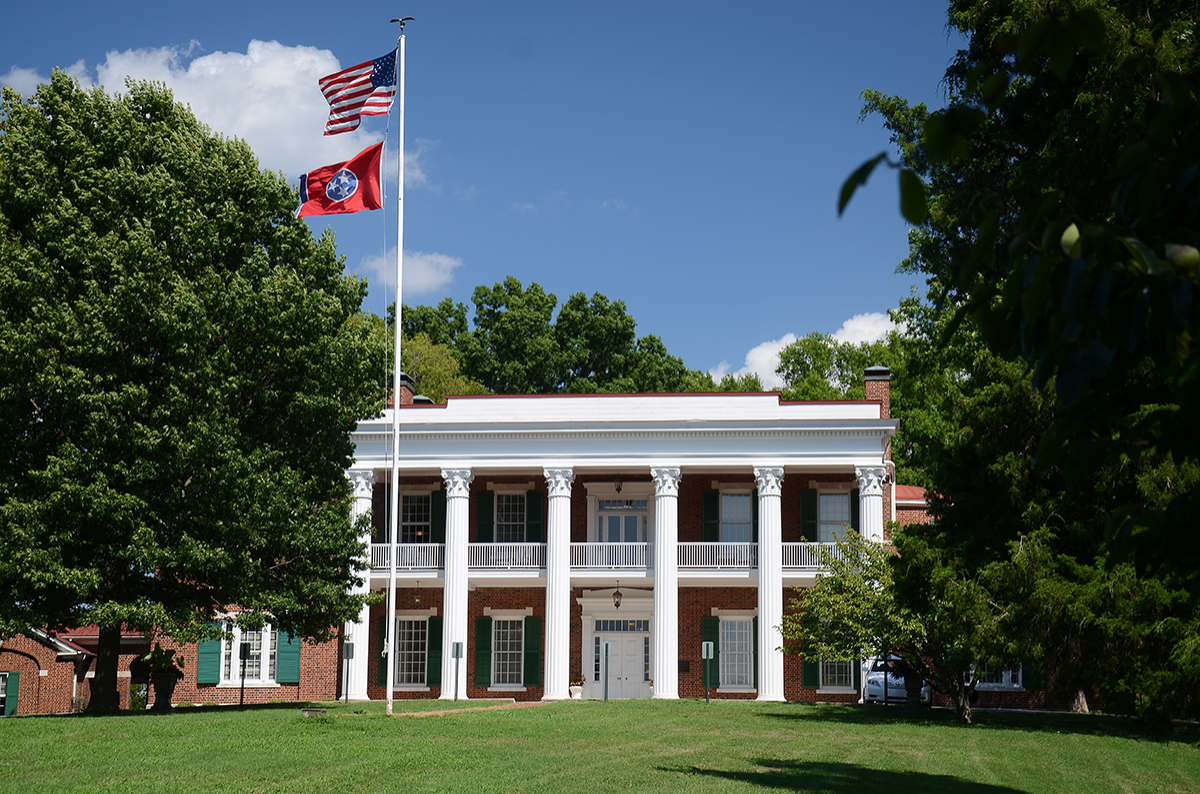 Once a private estate, the 207 acre Ellington Agricultural Center is now headquarters for the Tennessee Department of Agriculture and other local, state, and federal agencies.

A Home with a History

The estate known as Brentwood Hall was built by Rogers Caldwell, son of prominent Nashville banker James Caldwell. The younger Caldwell made his fortune—reported at one time at $650 million—and made his mark in Tennessee as a financial wizard during the 1920s. Caldwell, known at that time as “The J.P. Morgan of the South,” had a dream to restore the South, which was still reeling from the Civil War. He coined the phrase, “We bank on the South” for his venture, Caldwell and Co., which included the Bank of Tennessee.

Andrew Jackson, a Tennessean and the nation’s seventh president, was Caldwell’s hero. Caldwell used Jackson’s home, The Hermitage, as the model for his home at Brentwood Hall, dubbed Brentwood House. A primary difference between the two structures is that Brentwood House's oversized Williamsburg bricks, said to be imported from Virginia, were never painted white.

As inscriptions on the house attest, the building was completed in 1927. Caldwell’s interior designer collected from Europe the outstanding marble fireplaces, mantles, gilt mirrors and some of the fixtures which still grace the mansion.

Caldwell lost both his fortune, and eventually Brentwood Hall, when his Bank of Tennessee collapsed during the Great Depression. The state gained a judgment against the house for part of Caldwell’s debts, though he continued to live there until 1957. No need to mourn his fate; he was only 40 years old when the Great Depression hit, and he continued to play an important role in Nashville society and politics for nearly 40 more years. To be invited to one of Caldwell’s weekly luncheons at his comfortable Antebellum home in Franklin was a mark of one’s own importance to society or the political community.

Hanging in each of Caldwell’s homes was his adage, “While in this house please do not say anything unkind about anyone, bearing in mind that what you think of others is nothing like as important as what others might think of you.” Surely Caldwell himself would have nothing negative to say about the events of his life or the important role his home has come to play for the state.

Buford Ellington, a former commissioner of agriculture, was elected governor in 1958 and set up offices in the then-empty house to organize his administration. Following his inauguration, Ellington decided against selling the estate and began moving the state agricultural offices from their cramped downtown quarters to the mansion. William F. “Red” Moss, who followed Ellington as agriculture commissioner, moved his office into Brentwood House in 1960.

Several of the original Brentwood Hall buildings have been restored and remodeled to serve new functions. Most of the restored buildings line a large green lawn shaped by the exercise track Caldwell built to train and race his famous Thoroughbreds.  In 1930, Caldwell owned the premier racing mare of the season, Lady Broadcast, and the great stud, Hourless, though he himself never bet.

In 1970, Brentwood House was renamed the W.F. “Red” Moss Administration Building in honor of the longest tenured commissioner of agriculture. The 23-room mansion provides offices for the Tennessee Department of Agriculture’s commissioner, the deputy and assistant commissioners, budget, human resources, and public affairs services. The home’s Corinthian columns, double doors, and circular stairway in the entrance hallway are obvious replicas of the Hermitage. The wallpaper in the hallway—hand painted in the French History fashion of the 18th century—was imported from France.

Adjoining the administration building is the Moss Annex Building. The interior spaces were originally Caldwell’s servants’ quarters during the 1930s. “Aunt Willie” was responsible for washing and ironing Caldwell’s white pleated dress shirts.  Both the washing and drying were done inside; no clothes were allowed to flap in the breeze outdoors near the mansion. The former servants' quarters adjoining the breezeway are now used as offices for public affairs. 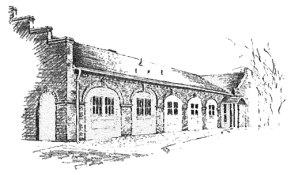 Just across the drive from the Moss Annex Building, USDA-APHIS Veterinary Services have their offices in what was once a six-car garage. When the building was first being explored by department lab technicians, they discovered that Caldwell had operated a bottling plant in the basement, turning out a soft drink known as “Teaco-Cola.”  The floor was knee-deep in Teaco-Cola bottle caps, and cases of the drink were still on the premises. The building was named for Matt Jennings, a former director for 33 years of the marketing division for the Tennessee Department of Agriculture.

The auditorium, a remodeled stable intended for Caldwell’s fine racehorses, is available for state functions and agricultural events. Thirty-two thoroughbreds occupied the stalls until 1957. The auditorium, which has a kitchen and large assembly area, was named for former agriculture commissioner and U.S. congressman Ed Jones in 1989. 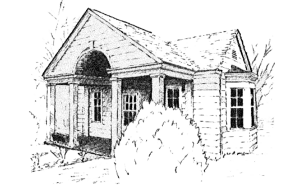 Behind the mansion in a small, remodeled house is TDA’s accounting office. The building was originally used as a farm office for Caldwell’s various operation bosses to meet and conduct farm business.

Another of the large barns where Caldwell housed his horses is now home to the Tennessee Agricultural Museum, founded by Oscar L. Farris. Farris was a former Davidson County extension agent who began the collection in 1940. The museum, created by an act of the legislature in 1959, encourages interest and understanding of Tennessee’s rich, rural heritage by exhibiting a priceless collection that draws thousands of visitors from across the nation. Educational programs, festivals, and other special events offer hands-on activities and a glimpse of farm life both past and present. The Strasser Experience Center along with the Eagle Trail, heirloom vegetable garden, molasses mill, log cabins, herb garden and post-and-beam shed for large equipment provide additional points of interest and are supported, in part, by an active museum association. The museum also includes the nation's first Agricultural Hall of Fame, established by the legislature in 1937. Admission is free.

Several buildings remaining on the estate after Caldwell’s departure were too decayed for restoration. However, a group of log buildings traditionally occupied by tenants who worked Caldwell's farm were preserved. The log dwellings and a clapboard farmhouse were remodeled to host activities of the Agricultural Museum.  The Safely Chapel and School was constructed on site in recent years using traditional methods. 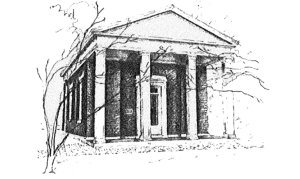 On the southern side of the mansion is the building which served as a guest house for visitors of the Caldwell family.  Now TDA’s general counsel office, the library was named for Lou Wallace, a much-loved gentleman who edited a department publication, "The Tennessee Market Bulletin,” for 25 years—from the time he was 75 until he died at the age of 102. 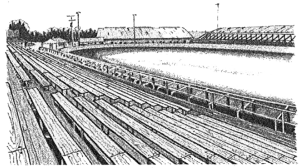 One of the first improvements to the center was an indoor exhibit and livestock hall suitable for sale and show events, and a 98-stall barn finished in California redwood. The area outside the building once included a livestock show ring and stadium seating.

The Division of Forestry is headquartered in this building, named for longtime plant industries director Howard L. Bruer, who oversaw the development of the center’s landscaping and the design of the building. The Bruer Building lies between the Accounting Office and the Lou Wallace Library along the path of the old racetrack. The Division of Forestry is responsible for enhancing and protecting forest health, sustainability and productivity on private and public forest lands.

The Edward S. Porter Building contains the Consumer and Industry Services (CIS) Division and the Division of Animal Health. Both provide a range of services to ensure product safety and quality, animal and plant health, and fairness in the marketplace. This building is named for a former commissioner, as is the L.H. “Cotton” Ivy Laboratory. The C.E. Kord Animal Health Diagnostic Laboratory, which was first established in 1960, is named for a former state veterinarian. 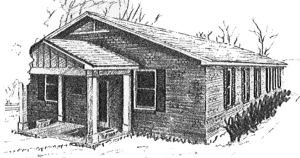 The Commodity Distribution section is responsible for the distribution of federal surplus commodities to the school lunch program and charitable institutions. The section is housed in a small brick building between the Holeman Building and the Ed Jones Auditorium.

The Business Development Division and Land and Water Stewardship section of the Department of Agriculture are in the Holeman Building, which lies between the Jennings Building and the Commodity Distribution Building.  The building was named for Eugene H. Holeman, a director of the preceding Food and Drugs Division of TDA. USDA’s National Agricultural Statistics Service Tennessee field office and TDA’s Human Resources staff are also found here.

A tract of land on the Edmondson Pike side of the property was turned over to the Tennessee Wildlife Resources Agency. TWRA's headquarters and Region 2 office are located here. TWRA is responsible for the conservation, management and protection of fish and wildlife in the state for public benefit.

This site consists of different building foundation types commonly found in Tennessee, which are used by TDA’s Pesticide Section to train commercial applicators in safe and proper methods of termite treatment. The site is in front of the JLL Facility Manager’s office and adjacent to the UT Extension building on Marchant Drive. 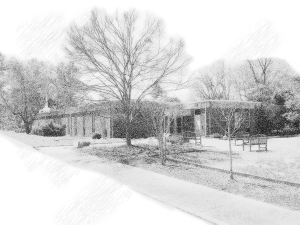 The Central Region office of UT Extension is also located at Ellington Agricultural Center. The office serves Middle Tennessee in the areas of agriculture, family and consumer science, and 4-H. The building also houses the statewide UT Soil, Plant and Pest Center, which provides disease and pest identification, recommendations, and analytical services. The Extension building borders the southwestern edge of the property along Marchant Drive. 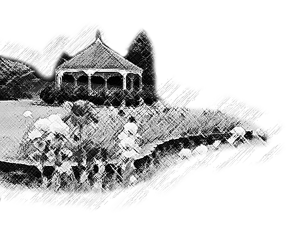 The large iris garden, located to the right inside the front entrance, is developed and tended by the Middle Tennessee Iris Society. The iris is the official flower of Tennessee and the garden is cultivated in its honor.